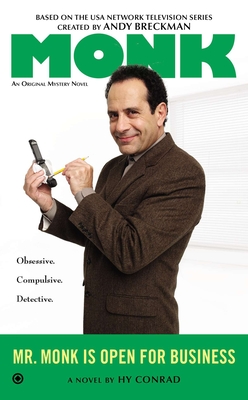 Mr. Monk Is Open for Business

Welcome to the series of original mysteries starring Adrian Monk--based on the hit USA Network series Monk, starring Tony Shaloub--the brilliant investigator who always knows when something’s out of place....

Failing to win back his girlfriend in New Jersey, Monk returns to San Francisco where Natalie has set up an office for Monk and Teeger, Consulting Detectives. It’s time to stop bickering and get to work when Lieutenant Amy Devlin comes to them for help.

A disgruntled employee came into work and started shooting, killing three coworkers and leaving a female hostage severely wounded. After spotting the shooter through office windows, the police lost him—leaving Lieutenant Devlin with a real mess on her hands.

Visiting the bedridden survivor, Monk finds her to be helpful, cooperative…and quite charming as well. But the more he and Natalie try to track down the assailant, the more he seems to have disappeared from existence altogether....


Praise For Mr. Monk Is Open for Business…

“Fans of the series should rejoice! Adrian Monk couldn’t be in better hands. Thank you, Hy Conrad.”—Andy Breckman, Cocreator and Executive Producer of the USA Network Television Series Monk

Praise for the Monk Mysteries

“Entertaining and ruefully funny...stars one of television’s best-loved characters.”—Honolulu Star-Bulletin

“You say you don’t read tie-in novels? You should give the Monk books a try and find out what you’ve been missing.”—Bill Crider, author of Murder in the Air

“Truth is, you’d be hard-pressed to find another recent work that provides so many hip and humorous moments, along with its believable plot twists. Monk series fans—and that means both the TV show and these novels—have another winner here to enjoy.”—Bookgasm