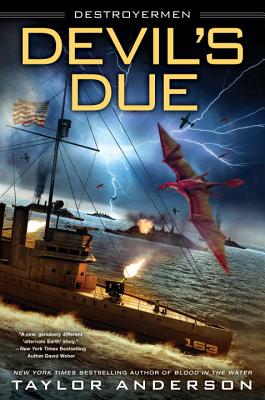 Captain Matt Reddy and the crew of the USS Walker have been fighting for their lives ever since their ship was swept from the Pacific to another world and they became embroiled in a deadly conflict between their Lemurian allies and the ravening Grik.

But things are about to get worse. With Reddy’s family and allies held prisoner by the mad General Kurokawa, the mysterious League and evil Dominion plotting schemes of their own, and the Grik trying to build their swarm and concentrate power, Reddy faces danger on all sides.

Although desperate to confront Kurokawa, Captain Reddy fears he’s subordinating the war effort for personal reasons. But Kurokawa is too dangerous to be left alone. With the mighty League battleship Savoie at his command, he plots a terrible vengeance against Reddy and his tiny, battered destroyer.

The stage is set for a devastating cataclysm, and Reddy and his allies will have to risk everything to protect what they hold dear.

Praise For Devil's Due (Destroyermen #12)…

Praise for the Destroyermen Series

Taylor Anderson is the New York Times bestselling author of the Destroyermen
series, including Blood in the Water, Straits of Hell, and Deadly Shores. A gunmaker and forensic ballistic archaeologist, Taylor has been a technical and dialogue consultant for movies and documentaries and is an award-winning member of the United States Field Artillery Association and of the National Historical Honor Society. He has a master’s degree in history and has taught that subject at Tarleton State University in Stephenville, Texas. He lives in nearby Granbury with his family.
Loading...
or
Not Currently Available for Direct Purchase