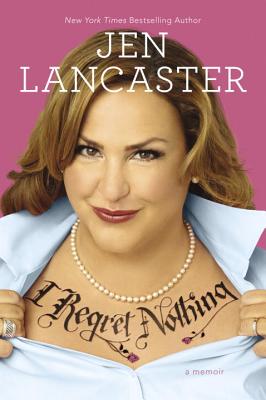 I Regret Nothing (Hardcover)

New York Times bestselling author Jen Lancaster has lived a life based on re-invention and self-improvement. From Bitter Is the New Black to The Tao of Martha, she’s managed to document her (and her generation’s) attempts to shape up, grow up, and have it all—sometimes with disastrous results…

Sure Jen has made mistakes. She spent all her money from a high-paying job on shoes, clothes, and spa treatments. She then carried a Prada bag to the unemployment office. She wrote a whole memoir about dieting…but didn’t lose weight. She embarked on a quest for cultural enlightenment that only cemented her love for John Hughes movies and Kraft American Singles. She tried to embrace everything Martha Stewart, while living with a menagerie of rescue cats and dogs. (Glitter…everywhere.)

Mistakes are one thing; regrets are another.

After a girls’ weekend in Savannah makes her realize that she is—yikes!—middle-aged (binge watching is so the new binge drinking), Jen decides to make a bucket list and seize the day, even if that means having her tattoo removed at one hundred times the cost of putting it on.

From attempting a juice cleanse to studying Italian, from learning to ride a bike to starting a new business, and from sampling pasta in Rome to training for a 5K, Jen is turning a mid-life crisis into a mid-life opportunity, sharing her sometimes bumpy—but always hilarious—attempts to better her life…again.

Jen Lancaster is the New York Times bestselling author of ten previous books (Twisted Sisters, The Tao of Martha, Here I Go Again, Jeneration X, If You Were Here, My Fair Lazy, Pretty in Plaid, Such a Pretty Fat, Bright Lights, Big Ass, Bitter Is the New Black). She has appeared on Today, The Joy Behar Show, and NPR’s All Things Considered. She resides in the suburbs of Chicago with her husband and their ever-expanding menagerie of ill-behaved pets.

Praise For I Regret Nothing: A Memoir…

“Hilarious… Lancaster tackles everything from getting a tattoo removed to running a 5K…No complaints here.”—InStyle

MY FAIR LAZY
“Hilarious...My Fair Lazy does not ‘suck it.’ It rocks it.”—Examiner.com

“Light and fun and full of pop-culture musings.”—Chicago Sun-Times

PRETTY IN PLAID
“Like that dreamy pair of heels that [is] somehow both comfy and chic…a hilarious tribute to her early fashion obsessions.”—People

SUCH A PRETTY FAT
“She’s like that friend who always says what you’re thinking—just 1,000 times funnier.”—People