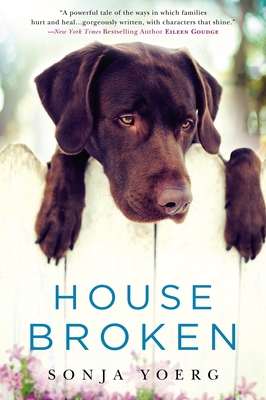 In this compelling and poignant debut novel, a woman skilled at caring for animals must learn to mend the broken relationships in her family.…

For veterinarian Geneva Novak, animals can be easier to understand than people. They’re also easier to forgive. But when her mother, Helen, is injured in a vodka-fueled accident, it’s up to Geneva to give her the care she needs.

Since her teens, Geneva has kept her self-destructive mother at arm’s length. Now, with two slippery teenagers of her own at home, the last thing she wants is to add Helen to the mix. But Geneva’s husband convinces her that letting Helen live with them could be her golden chance to repair their relationship.

Geneva isn’t expecting her mother to change anytime soon, but she may finally get answers to the questions she’s been asking for so long. As the truth about her family unfolds, however, Geneva may find secrets too painful to bear and too terrible to forgive.

“A stunning debut that will leave readers wanting more! Yoerg is on par with established women’s fiction authors such as Jennifer Weiner and Sarah Pekkanen.”—Library Journal (starred review)

“A riveting tale exploring the power of family secrets.“—Ellen Marie Wiseman, author of What She Left Behind

"Sonja Yoerg creates a compelling tale of a family gone awry, and the ultimate cost of maintaining shameful secrets. House Broken is everything I love in women’s fiction...beautiful writing, strong characters, a dash of mystery, and the hope for redemption."—Lori Nelson Spielman, International bestselling author of The Life List

“A sparkling and insightful debut.”—Emily Liebert, author of When We Fell

“With marvelous wit, Yoerg shows us that for almost every dark pocket of pain a family’s history hides, there is, ultimately, a ray of light and love.”—Julie Lawson Timmer, author of Five Days Left

Sonja Yoerg grew up in Stowe, Vermont, and earned her Ph.D. in Biological Psychology from the University of California at Berkeley. Her non-fiction book about animal intelligence, Clever as a Fox was published in 2001. She currently lives in the Shenandoah Valley of Virginia with her husband. Together they run, garden, remodel houses, cook, eat, drink wine, then run some more. House Broken is her first novel.

Helen’s choices within her marriage were shaped by the nature of small town life in the South during the 60s. Imagine, however, she lived in present-day California with a powerful and abusive husband and a daughter in denial of her victimhood. Would Helen have different options? Would she take them? If not, would she deserve forgiveness? Did she deserve the forgiveness granted her by Geneva and Dublin?

Geneva brought her mother into her home, despite her adamant belief that old dogs can’t learn new tricks. Were there other instances where Geneva second-guessed her instincts? Have you ever made the right decision by ignoring your instincts?

The story is filled with dogs, and each plays a role in the plot, sometimes figuratively. Diesel is Geneva’s faithful companion; who else stood by her? Which human character reminded you of Aldo, Juliana’s Doberman, and how did Geneva come to make this comparison? What lesson did we learn from Argus, Paris’ German shepherd? Finally, the retriever at the rescue clinic is flawed, but not irredeemable. Who else could be described in those terms?

Paris is an intricate, disturbed and disturbing character. How did you feel about her as a victim of incest? As Helen’s daughter? As a sister to Geneva?

Ella and Charlie have a complicated relationship and keep many secrets from their parents. How do they evolve over the course of the story? What do you think happens to them over the next few years?

Geneva’s brother is the one saving grace from her childhood. Discuss how Geneva might have become a different person without Dublin.

Paris notwithstanding, the Riley children become relatively well-balanced adults. Does this outcome justify Helen’s actions? Dublin, in particular, appears bulletproof. Do you see this as a function of his personality or something else in the family dynamic?

At the beginning of the novel, Tom and Geneva bump heads over parenting. How are their approaches affected by their own family histories? How does this change over the course of the story?

Helen’s children’s views of their upbringing are as far flung as the children themselves. How do siblings come to such different perspectives on the same events? Do you and your siblings hold similar views of your family life?

Geneva learns to forgive her mother, at least in part, and learns to let her go. What else did Geneva learn over the course of the story?