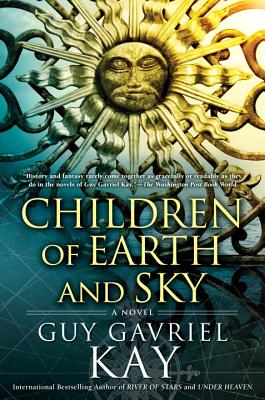 The bestselling author of the groundbreaking novels The Last Light of the Sun, Sailing to Sarantium, and Lord of Emperors, Guy Gavriel Kay is back with a new book, set in a world inspired by the conflicts and dramas of Renaissance Europe. Against this tumultuous backdrop the lives of men and women unfold on the borderlands—where empires and faiths collide.

From the small coastal town of Senjan, notorious for its pirates, a young woman sets out to find vengeance for her lost family. That same spring, from the wealthy city-state of Seressa, famous for its canals and lagoon, come two very different people: a young artist traveling to the dangerous east to paint the grand khalif at his request—and possibly to do more—and a fiercely intelligent, angry woman, posing as a doctor’s wife, but sent by Seressa as a spy.

As these lives entwine, their fates—and those of many others—will hang in the balance, when the khalif sends out his massive army to take the great fortress that is the gateway to the western world...

Praise for Children of Earth and Sky

“Guy Gavriel Kay has a wonderful talent. He tells stories in an invented world that is so rich in historical echoes that I found myself smiling with pleasure as I heard the echoes, while engrossed in the story. Warmly recommended.”—Edward Rutherfurd, bestselling author of Sarum

[Kay's] approach, which is to explore our shared humanity through a prism of fantasy and history, is unparalleled... weaves a heartwrenching, exquisitely rendered tale that speaks to every time and place.”—Huffpost Books

“...Kay is in masterful control of his material, and the prose is elegant. This is writing of the highest order. Very highly recommended.”—The Historical Novel Society

"A book of the year ... about ordinary people not so different from you and me, Children of Earth and Sky is every inch the equal of the superlative Sarantine Mosiac.”—Tor.com

Praise for the novels of Guy Gavriel Kay

“History and fantasy rarely come together as gracefully or readably as they do in the novels of Guy Gavriel Kay.”--The Washington Post Book World

“Kay is a genius. I've read him all my life and am always inspired by his work.”--#1 New York Times bestselling author Brandon Sanderson

"A storyteller on the grandest scale."--Time Magazine, Canada

Guy Gavriel Kay is the international bestselling author of numerous fantasy novels including The Fionavar Tapestry trilogy, Tigana, The Last Light of the Sun, Under Heaven, River of Stars, and Children of Earth and Sky. He has been awarded the International Goliardos Prize for his work in the literature of the fantastic, and won the World Fantasy Award for Ysabel in 2008. In 2014 he was named to the Order of Canada, the country’s highest civilian honor. His works have been translated into more than twenty-five languages.
Loading...
or
Not Currently Available for Direct Purchase