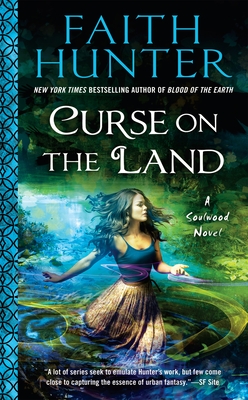 Curse on the Land (A Soulwood Novel #2)

Set in the same world as Faith Hunter’s New York Times bestselling Jane Yellowrock novels, the second Soulwood novel tells the story of a woman whose power comes from deep within the earth...

Before Nell Ingram met skinwalker Jane Yellowrock, she had no one to rely on, finding strength only in her arcane connection to the dark woods around her. But now she has friends in the newly formed PsyLED team to keep her grounded—even if being part of the agency responsible for policing paranormals comes with dangers of its own....

After training at the PsyLED academy, Nell returns home to her woods to find the land feeling sick and restless. And that sickness is spreading. With the help of her team, under the leadership of agent Rick LaFleur, Nell tries to determine the cause. But nothing can prepare them for the evil that awaits: an entity that feeds on death itself. And it wants more....

Praise For Curse on the Land (A Soulwood Novel #2)…

Praise for Blood of the Earth:

“The best first installment of an urban fantasy series I’ve read in about a decade. Highly recommended.”—Rabid Reads

“Plenty of action, magic, and fascinating characters, both familiar and new, create another terrific urban fantasy from an established author.”— Library Journal

Praise for the novels of Faith Hunter:

“Smart, sexy, and ruthless.”—Kim Harrison, New York Times Bestselling Author of The Witch with No Name

“Bold and imaginative in approach, with appealing characters and a suspense-filled story.”—Library Journal