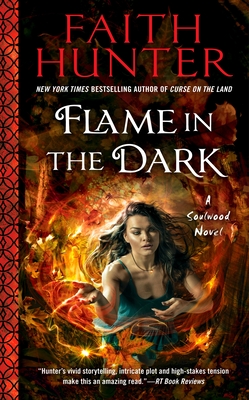 Flame in the Dark (A Soulwood Novel #3)

Nell Ingram has always known she was different. Since she was a child, she’s been able to feel and channel ancient powers from deep within the earth. When she met Jane Yellowrock, her entire life changed, and she was recruited into PsyLED—the Homeland Security division that polices paranormals. But now her newly formed unit is about to take on its toughest case yet.

A powerful senator barely survives an assassination attempt that leaves many others dead—and the house he was visiting burns to the ground. Invisible to security cameras, the assassin literally disappears, and Nell’s team is called in. As they track a killer they know is more—or less—than human, they unravel a web of dark intrigue and malevolent motives that tests them to their limits and beyond.

Praise For Flame in the Dark (A Soulwood Novel #3)…

“Urban Fantasy fans will love Nell Ingram and her unique way of handling life and those around her.”—Smexy Books

“Faith Hunter does a masterful job in writing this suspenseful exciting story, and has created a wonderful new heroine in Nell, who continues to grow into her powers.”—The Reading Café

“From start to finish, this book is packed with action.”—Will Read for Feels

“An interesting and quite unique main character in an already fascinating and broad world.”—Fangs For The Fantasy

“Incredible world-building, complex, multi-faceted characters, and fast-moving plot create a book that begs to be devoured in one sitting.”—Romance Junkies

“Masterful storytelling that is rich and saturated with detail!”—The Genre Minx