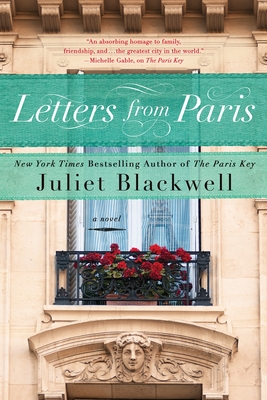 From the New York Times bestselling author of The Paris Key comes the story of a mysterious work of art and the woman inspired to uncover its history in the City of Light.

After surviving the accident that took her mother’s life, Claire Broussard has worked hard to escape her small Louisiana hometown. But these days she feels something is lacking. Abruptly leaving her lucrative job in Chicago, Claire returns home to care for her ailing grandmother. There, she unearths a beautiful piece of artwork that her great-grandfather sent home from Paris after World War II.

At her grandmother’s urging, Claire travels to Paris to track down the century-old mask-making atelier where the object, known only as “L’Inconnue”—or The Unknown Woman—was created. Under the watchful eye of a surly mask-maker, Claire discovers a cache of letters that offers insight into the life of the Belle Epoque woman immortalized in the work of art. As Claire explores the unknown woman’s tragic fate, she begins to unravel deeply buried secrets in her own life.

Praise For Letters from Paris…

Praise for Letters from Paris

"Best-selling author Blackwell brings us another captivating tale from the City of Light....this romantic and picturesque novel shows us that even the most broken people can find what makes them whole again.—Booklist

"Blackwell paints a picture of Paris that is both artistically romantic and realistically harsh...A compelling story of Paris, art, and love throughout history."—Kirkus Reviews

"Blackwell has woven a great tale of mystery, artistry, history, and a little romance. With plenty of backstory and tidbits about Parisian life in the 19th century, there’s something for everyone in this recommended read."—Library Journal


Praise for The Paris Key

“A charming protagonist and a deep well of family secrets, all gorgeously set in the City of Lights.”—Michelle Gable, international bestselling author of I’ll See You in Paris

“A gorgeously-plotted novel woven with luminescent charm.”—Rachael Herron, author of Splinters of Light

“[A] witty, warm, winsome novel...[Blackwell’s] generation-spanning tale combines intrigue and passion with a flawless ear for language and a gift for sensory detail.”—Sophie Littlefield, bestselling author of The Guilty One

“Blackwell's novel has all of the components that the best novels are made of: an intriguing and compelling storyline, an extremely likable protagonist, a dreamy location and a small dash of suspense and mystery.”—RT Book Reviews

“Better than a travel guide because it carries the essence of friendship, food, drink, story, and history that one can only convey through Parisian residents. Delightful and highly recommended!”—The Best Reviews

Juliet Blackwell was born and raised in the San Francisco Bay Area, the youngest child of a jet pilot and an editor. She graduated with a degree in Latin American studies from the University of California, Santa Cruz, and went on to earn master’s degrees in anthropology and social work. While in graduate school, she published several articles based on her research with immigrant families from Mexico and Vietnam, as well as one full-length translation: Miguel León-Portilla’s seminal work, Endangered Cultures. Juliet taught medical anthropology at SUNY–Albany, was producer for a BBC documentary, and worked as an elementary school social worker. Upon her return to California, she became a professional artist and ran her own decorative painting and design studio for more than a decade. In addition to mainstream novels, Juliet pens the New York Times bestselling Witchcraft Mysteries and the Haunted Home Renovation series. As Hailey Lind she wrote the Agatha Award–nominated Art Lover’s Mysteries series. She makes her home in northern California, but spends as much time as possible in Europe and Latin America.

1. Claire finds herself at a crossroads in life, and takes off to Paris. Do you find her actions precipitous? Could you imagine picking up and starting over in a foreign land? What factors made it possible for her to do so?

2. Have you ever felt that you just didn’t belong– whether in your new circumstances, or when you went back home, or both? If so, did you adjust over time, or did you take steps to change your situation?

3. Have you ever been so intrigued by an item – a piece of art, a letter, an old journal—that you were compelled to trace its history? Do you find it believable that Claire went to Paris to research L’Inconnue’s mask?

4. In what ways did the themes of Sabine’s and Claire’s stories intersect in the novel, and in what ways are they different?

5. Sabine and Claire both come from humble backgrounds. Claire was able to move to a big city and do well for herself, while Sabine’s choices were very limited. Still, Sabine was lucky to be in Paris during a time when artists were hungry for models. If Sabine were living in contemporary times, how might her experiences (and opportunities) have been different?

6. When Claire is first touring Paris, she finds the city disappointing. How does she come to love it? Have you ever had a similar experience?

7. What do you think of the concept of kintsugi? Are there broken things in your life – physically or metaphorically – that you are inspired to repair with gold lacquer, to make a feature of the breakage?

8. Several times Claire reflects on the sentence: “Who knows the truth? It is the story that is told.” Are there family stories in your life that you question? How might such tales take on a life of their own?

9. Had you ever heard of the sculptor Camille Claudel? How do you think her sculpting career might have developed differently had she been a man? In what ways do you think Claudel influenced Sabine?

10. Why do you think so many people have been enamored with the “Mona Lisa smile”? What do you think it was about L’Inconnue’s smile –or her story– that has made people respond so strongly to her mask?

11. Do you have the sense that Claire’s fear of water is symbolic? What might it mean for her to “learn to swim”?

12. Toward the end of the novel, Delphine and Pierre-Guillaume bring a painting of Galatea to the studio. In it, the statue is freeing herself from a block of marble. How does this relate to Sabine’s earlier experiences?

13. Camille Claudel points out to Sabine that a muse chooses her artist, rather than the other way around. In the later part of her life, do you think Sabine chose Jean-Baptiste as the “artist of her choosing,” or herself?

14. Do you think Armand and Claire will go on to renovate the family château? Why, or why not? Do you think it would be worth it to do so?

15. What do you suppose happened to the real model for the L’Inconnue death mask?