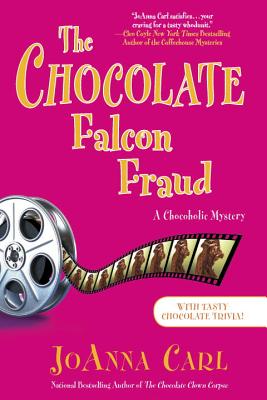 From the bestselling author of The Chocolate Clown Corpse, it’s murder, my sweet, for a chocolatier whose love of old crime films plunges her into a real-life murder where the motives aren’t so black and white…

The Warner Pier tourism board is kicking off its Tough Guys and Private Eyes film festival with The Maltese Falcon, and Lee Woodyard and her Aunt Nettie are preparing a delicious chocolate noir tie-in at TenHuis Chocolade. What Lee isn’t prepared for is a face from the past: Jeff Godfrey, her former stepson. The last time Jeff showed up in town, he wound up being accused of murder. Now he says he’s only in Warner Pier to see Bogart on the big screen. Honest.

Jeff may now be a college grad, but that doesn’t mean he’s any less naïve than the kid Lee had to bail out of trouble earlier. There are all those strange phone calls, a girlfriend who’s secretly on Jeff’s tail, and a pack of suspicious-sounding acquaintances right out of Dashiell Hammett. Then Jeff goes missing, the Falcon theme is haunting everyone, and a body falls at Lee’s feet when she opens the front door – just like in the movie.

The national bestselling author of the Chocoholic mysteries, including The Chocolate Clown Corpse, JoAnna Carl is the pseudonym for a multipublished mystery writer. She spent more than twenty-five years in the newspaper business as a reporter, feature writer, editor, and columnist. She holds a degree in journalism from the University of Oklahoma and also studied in the OU Professional Writing Program. She lives in Oklahoma but summers in Michigan, where the Chocoholic mysteries are set.

Praise for the Chocoholic Mystery Series

“A deft mix of truffles and trouble. Chocoholics—this book is for you!”
—Laura Childs, New York Times bestselling author of the Tea Shop Mysteries
or
Buy Here
(This book is on backorder)
Copyright © 2020 American Booksellers Association