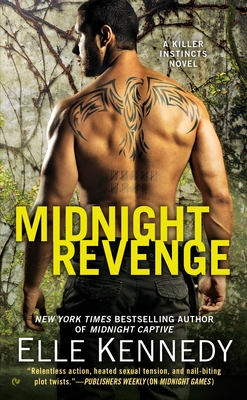 From the USA Today bestselling author of Midnight Captive, the latest Killer Instincts novel is “off-the-charts-hot”* romantic suspense that takes readers into the heart of an enigmatic mercenary...

Out of all the stone-cold mercenaries in Jim Morgan's black ops organization, Derek “D” Pratt is the most intimidating. He is tight-lipped and covered in tattoos, and even the other guys on his team are afraid to ask him about his past. D’s been off the grid for years, but after his teammate Sullivan is mistakenly captured in his place, D is forced to come out of hiding and face his demons.

When D lands in Mexico, he’s ready to risk everything to save his friend. To complicate matters, Sofia Amaro, a feisty doctor whom D had a one-night stand with months ago, has tracked him down. And in an instant she’s unintentionally caught up in his life-threatening rescue mission.

Now D must extract not one but two people from the most violent world he's ever encountered. And one of them is carrying his child...

RITA-nominated author Elle Kennedy is the author of the Killer Instincts Novels, including Midnight Captive, Midnight Actions, Midnight Pursuits, and Midnight Games. She grew up in the suburbs of Toronto, Ontario, and holds a BA in English from York University. From an early age, she knew she wanted to be a writer and actively began pursuing that dream when she was a teenager. She loves strong heroines, alpha heroes, and just enough heat and danger to keep things interesting!

Praise for the Killer Instincts Novels