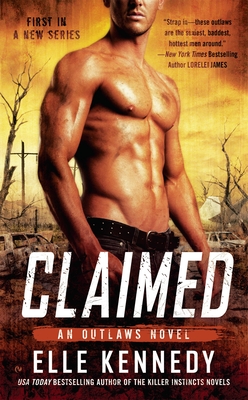 The bestselling author of the Killer Instincts novels “knows how to write scorching sexual tension”*. Now she really sets it on fire in a new series about men and women living on the edge of violence, sex, and life and death.

After a devastating war decimated most of the world, Hudson Lane has only known the oppressive life under her own father’s tyranny. She finally escapes, branding herself an outlaw and hunted by the Enforcers. Her best chance at survival is Connor Mackenzie, an aggressively sensual fugitive who opens her eyes to the wicked possibilities of a world without rules.

As the leader of a band of outlaw fighters, Connor can’t resist the beautiful stranger who asks for his protection. Despite his reservations, he agrees to introduce her to a whole new way of life. But when Connor discovers Hudson’s connection to the enemies of liberty, he wonders how far he can trust the woman who has abandoned all inhibitions to challenge every forbidden desire.

Praise For Claimed (The Outlaws Series #1)…

“Fans will be eager to see what Ms. Kennedy has in store for her mercenaries.”—Shannon K. Butcher, author of Edge of Betrayal

RITA-nominated and USA Today bestselling author of the Killer Instincts novels (Midnight Action, Midnight Captive), Elle Kennedy grew up in the suburbs of Toronto, Ontario, and holds a BA in English from York University. From an early age, she knew she wanted to be a writer and actively began pursuing that dream when she was a teenager. She loves strong heroines, alpha heroes, and just enough heat and danger to keep things interesting!
Loading...
or
Not Currently Available for Direct Purchase