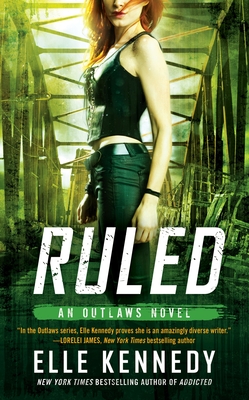 The latest novel in the series with the “sexiest, baddest, hottest”* outlaws around, from the New York Times bestselling author of Claimed.

In the latest novel in the series with the “sexiest, baddest, hottest”* outlaws around, one woman must choose between the two men who want to claim her...

Despite his magnetic personality, Rylan can’t seem to seduce Reese, the deadly leader of their town of outlaws. Winning her over is a welcome challenge, but her indifference isn’t the only thing standing in his way. If he wants Reese, Rylan must also win over Sloan, her stoic protector...

Sloan has always loved Reese, but their painful past has stolen his chances of a future with her. Rylan’s interest in Reese only intensifies the tension—until Sloan begins to wonder if the reckless man might be the one person who can bridge the distance...

The last time Reese fell for the wrong man, she had no choice but to kill him. Now, she desperately wants to take what both Rylan and Sloan are offering. But if she makes the wrong call again, she risks losing them both.

Elle Kennedy is the New York Times bestselling and RITA-nominated author of the Outlaws series, including Addicted and Claimed, and the Killer Instincts series. She grew up in the suburbs of Toronto, Ontario, and holds a BA in English from York University. From an early age, she knew she wanted to be a writer and actively began pursuing that dream when she was a teenager. She loves strong heroines, alpha heroes, and just enough heat and danger to keep things interesting!

Praise For Ruled (The Outlaws Series #3)…

Praise for the novels of Elle Kennedy

“In the Outlaws series, Elle Kennedy proves she is an amazingly diverse writer. The kickass characters in this unique world live on the edge; hard and fast without regrets...I loved every dirty, dangerous moment I spent with them!”—*New York Times bestselling author Lorelei James