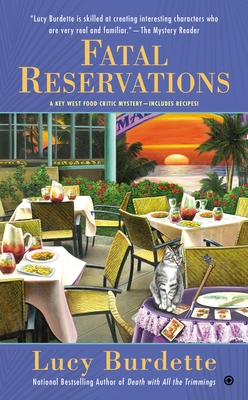 In the latest Key West Food Critic mystery, Hayley Snow’s beat is reviewing restaurants for Key Zest magazine. But she sets aside her knife and fork when a dear friend is accused of murder…

Hayley Snow looks forward to reviewing For Goodness Sake, a new floating restaurant that promises a fresh take on Japanese delicacies like flambéed grouper with locally sourced seaweed. But nearby land-based restaurateurs would rather see their buoyant competition sink.

Sent to a City Commission meeting to cover the controversy, Hayley witnesses another uproar. The quirky performers of the daily Sunset Celebration are struggling to hold onto their performance space. The fight for Mallory Square has renewed old rivalries between Hayley’s Tarot-card reading friend Lorenzo and a flaming-fork-juggling nemesis, Bart Frontgate—but things take a deadly turn when Bart is found murdered.

If Lorenzo could read his own cards, he might draw The Hanged Man. He can only hope that Hayley draws Justice as she tries to clear him of murder…

“Like a gourmet meal, it will leave you wanting more.”—Fort Myers Florida Weekly

"Three courses of cozy—romance, humor, and mystery—that will leave you satisfied yet looking forward to another serving."--The Florida Book Review

“A unique blend of island mayhem and sparkling characters surrounding a layered mystery.”—Booklist

Clinical psychologist Roberta Isleib, aka Lucy Burdette, has had thirteen previous mysteries published, including Death with All the Trimmings, Murder with Ganache, and Topped Chef in the national bestselling Key West Food Critic Mystery series. Her books and stories have been short-listed for Agatha, Anthony, and Macavity awards. She is a past president of Sisters in Crime.
Loading...
or support indie stores by buying on