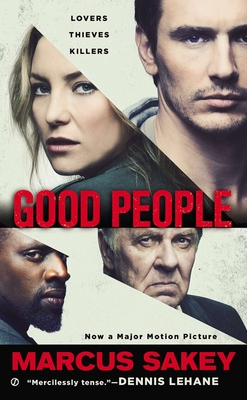 “This thriller about a young couple struggling to have a baby is a primer on what not to do when you find your surly tenant has died in his sleep and left $370,00 in cash stashed in his kitchen. A great read!”
— Jennie Turner-Collins, Joseph-Beth Booksellers, Cincinnati, OH
View the List

The basis for the hit movie starring James Franco and Kate Hudson
A thriller by the author of the Brilliance Saga and The Two Deaths of Daniel Hayes
“Good People [is] gleefully dread-filled, mercilessly tense, and moves with the speed of something fired from a sawed-off.”—Dennis Lehane

Tom and Anna Reed are young, middle-class, and in love.  But financial pressures and the struggle to have a baby are grinding them down. So when they find $370,000 in their tenant’s apartment, “happily ever after” seems one risky decision away.
But before the week is over, they’ll know exactly where the money is from—and come face to face with ruthless men who have been double-crossed.  Men who won’t stop until they get revenge.
Nothing in life is free, and for Tom and Anna, happiness may cost more than they can bear to pay…

Praise For Good People: A Thriller…

“Terrific.”—Chicago Tribune
“One of our best storytellers.”— Michael Connelly
"It’s the depth and intelligence and passion and emotion that set Sakey apart.”—Lee Child
"Sakey creates a moral dilemma fit for an advanced ethics class...I felt the protagonists' pain to the point of flinching."--Chicago Sun-Times
"Masterful. Each of Sakey's novels has topped the previous. GOOD PEOPLE follows that stellar pattern."--Florida Sun-Sentinel
"Sakey sees Chicago as a constant source of sin and temptation...[GOOD PEOPLE] is a classic bind."--The New York Times
"Sakey may have trouble equaling this stellar performance."--Publishers Weekly (starred review)

Marcus Sakey's thrillers have been nominated for more than fifteen awards, named New York Times Editor's Picks, and selected among Esquire's Top 5 Books of The Year.  In addition to Good People, his novels Brilliance, The Blade Itself, and The Amateurs are all in development as feature films.
Loading...
or support indie stores by buying on