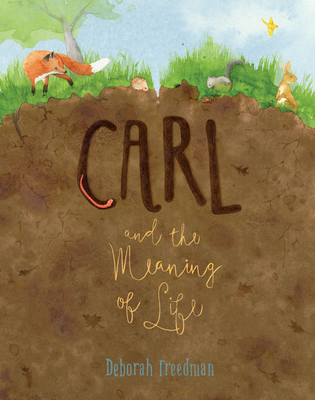 Carl and the Meaning of Life

From the often Caldecott-buzzed Deborah Freedman, a sweet and funny story about finding your place in the world.

Carl is an earthworm. He spends his days happily tunneling in the soil until a field mouse asks him a simple question that stops him short: "Why?" Carl's quest takes him on an adventure to meet all the animals of the forest, each of whom seems to know exactly what they were put on this earth to do, unlike the curious Carl. But it's not until the world around him has changed that Carl begins to realize everyone, no matter how small, makes a big difference just by being themselves.

Praise For Carl and the Meaning of Life…

★ "Her simple storytelling is supported by fabulous illustrations. . . will help youngsters understand the wonder and interconnectedness of nature." —Booklist, starred review

★ "A must-have in all collections!" —School Library Connection, starred review

★ "A poignant example of the important contributions of even the smallest creature.” —School Library Journal, starred review

"A pleasant, simplified examination of the significance of the lowly earthworm, just in time for garden encounters." —Kirkus Reviews

"Inviting readers to think about howthey, like the indomitable Carl, 'help the earth.'" —The Horn Book

Deborah Freedman (deborahfreedman.net) is a trained architect who now works as an author/illustrator. She is the author of This House, Once, Shy, By Mouse and Frog, The Story of Fish and Snail, Blue Chicken, and Scribble.
or support indie stores by buying on