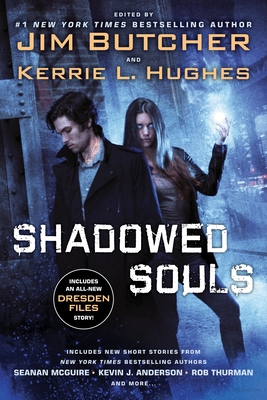 Featuring short stories from Jim Butcher, Seanan McGuire, Kevin J. Anderson, and Rob Thurman, this dark and gritty “must-read anthology for UF fans”(RT Book Reviews) proves that nothing is as simple as black and white, light and dark, good and evil...

In #1 New York Times bestselling author Jim Butcher’s Cold Case, Molly Carpenter—Harry Dresden’s apprentice-turned-Winter Lady—must collect a tribute from a remote Fae colony and discovers that even if you’re a good girl, sometimes you have to be bad...

New York Times bestselling author Seanan McGuire’s Sleepover finds half-succubus Elsie Harrington kidnapped by a group of desperate teenage boys. Not for anything “weird.” They just need her to rescue a little girl from the boogeyman. No biggie.

In New York Times bestselling Kevin J. Anderson’s Eye of Newt, Zombie P.I. Dan Shamble’s latest client is a panicky lizard missing an eye who thinks someone wants him dead. But the truth is that someone only wants him for a very special dinner...

Praise for Jim Butcher and the Dresden Files

“Butcher is the dean of contemporary urban fantasy.”—Booklist

“The plot is strong, the characterization is terrific, the tragedies hurt...and McGuire's usual beautiful writing and dark humor are present and accounted for. This has become one of my favorite urban fantasy series.”—Fantasy Literature

“Anderson's skill in delivering taut action scenes and creating well-rounded human and alien characters adds depth and variety to a series opener that belongs in most SF collections.”—Library Journal

Kerrie L. Hughes has edited thirteen anthologies in addition to Shadowed Souls, including Maiden Matron Crone, Children of Magic, Fellowship Fantastic, and Dimension Next Door.
Loading...
or
Not Currently Available for Direct Purchase