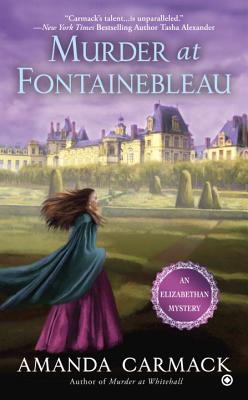 Murder at Fontainebleau (An Elizabethan Mystery #5)

In the latest Elizabethan mystery by the author of Murder at Whitehall, amateur sleuth Kate Haywood investigates deadly machinations unfolding behind the scenes in the magnificent French court.

1561. Queen Elizabeth’s throne is threatened as Mary Queen of Scots—pushed in every direction by opposing and powerful forces—declares herself the rightful Queen of England. To discover her rival’s next unpredictable move, Elizabeth dispatches a party of trustworthy intimates to Mary’s court at Fontainebleau. Chief among them is Kate Haywood, who finds that the glittering balls and genial banquets conceal a web of poisonous ambition that soon turns deadly.

When a beautiful and disruptively flirtatious member of the visiting party is murdered, Kate suspects that the man who stands accused has been set up to discredit Elizabeth. She vows to find the real killer, but the French court is a labyrinth unlike any she has ever navigated before—and at every turn there are more traps set to spring.

Praise For Murder at Fontainebleau (An Elizabethan Mystery #5)…

Praise for the Elizabethan Mysteries

“This dramatic period is filled with intrigue, religious conflict, betrayal and danger, which [Carmack’s] writing brings out brilliantly . . . The story nimbly moves from the court to the back alleys, providing a complete treat for anyone who loves historical mysteries.”—RT Book Reviews (4 1/2 stars, Top Pick)

“Another nail-biting intoxicating ride . . . that had me wanting the next book immediately. Buy two copies: one for you and one for a friend.”—Mysteries and My Musings

Amanda Carmack is a pseudonym for a multipublished author. Her books have been nominated for many awards, including the RITA Award, the Romantic Times Reviewers’ Choice Award, the Booksellers Best, the National Readers Choice Award, and the Holt Medallion. Her Elizabethan mysteries include Murder at Whitehall, Murder at Hatfield House, as well as the e-novella, Murder at the Queen’s Masquerade.
Loading...
or
Not Currently Available for Direct Purchase