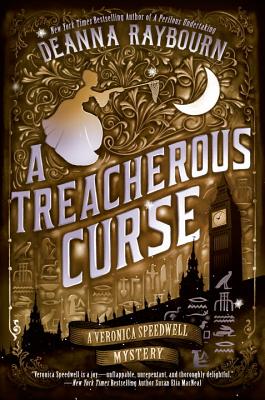 Members of an Egyptian expedition fall victim to an ancient mummy’s curse in this thrilling Veronica Speedwell novel from the New York Times bestselling author of the Lady Julia Grey mysteries.

London, 1888. As colorful and unfettered as the butterflies she collects, Victorian adventuress Veronica Speedwell can’t resist the allure of an exotic mystery—particularly one involving her enigmatic colleague, Stoker. His former expedition partner has vanished from an archaeological dig with a priceless diadem unearthed from the newly discovered tomb of an Egyptian princess. This disappearance is just the latest in a string of unfortunate events that have plagued the controversial expedition, and rumors abound that the curse of the vengeful princess has been unleashed as the shadowy figure of Anubis himself stalks the streets of London.

But the perils of an ancient curse are not the only challenges Veronica must face as sordid details and malevolent enemies emerge from Stoker’s past. Caught in a tangle of conspiracies and threats—and thrust into the public eye by an enterprising new foe—Veronica must separate facts from fantasy to unravel a web of duplicity that threatens to cost Stoker everything...

Praise For A Treacherous Curse (A Veronica Speedwell Mystery #3)…

Praise for A TREACHEROUS CURSE

“While readers of Elizabeth Peters’s ‘Amelia Peabody’ mysteries will enjoy this title, it is fans of Jane Eyre who will truly appreciate the third volume in Rabyourn’s historical series (following A PERILOUS UNDERTAKING). Her intricately plotted and dramatic story features a strong-willed, independent woman who is the intellectual equal of the brooding Stoker.”—Library Journal (Starred review)

“A Treacherous Curse [is] a funny, feminist, historical fiction mystery series that I love….If you haven’t started this series yet now’s a perfect time to get caught up!"—Book Riot


Praise for the Veronica Speedwell Mysteries

"I love this series! Veronica Speedwell is utterly unique--a lady with an intriguing past and some rare kick-ass skills--definitely not your standard historical mystery detective. Her relationship with the brooding and equally mysterious Stoker is fascinating. The plots are clever and fast-paced. I can't wait for the next adventure."—Amanda Quick, New York Times bestselling author of The Girl Who Knew Too Much


“Veronica Speedwell is sure to join the greats of mystery fiction.”—Alan Bradley, New York Times bestselling author of the Flavia de Luce series

“Veronica Speedwell might just be one of the most endearing heroines in mysteries, period...[a] woman ahead of her Victorian times. She’s smart, dashing, and entirely capable....Her sense of humor and chemistry with Stoker, her counterpart, just make this series even better.”—Bustle

“I love this book! Brings us the powerful Veronica Speedwell, who triumphs over adversity and danger with wit, charm, and uncanny determination. A real find.”—Robyn Carr, #1 New York Times bestselling author of the Virgin River series

“A smart, plucky, way-ahead-of-her-time heroine....The ending left me looking forward to Veronica’s next exploits.”—Fort Worth Star-Telegram

“A fun heroine who defies convention and embraces intrigue.”—Booklist

“Full of innuendo and amusing repartee, Deanna Raybourn's sly wit will be appreciated by readers of romance and historical fiction alike...a fun read, reminiscent of Elizabeth Peters's novels, whose cross-genre charm is sure to appeal to readers.”—Shelf Awareness

Deanna Raybourn is the author of the award-winning, New York Times bestselling Lady Julia Grey series, currently in development for television, as well as the USA Today bestselling and Edgar Award nominated Veronica Speedwell Mysteries and several standalone works.
Loading...
or support indie stores by buying on
(This book is on backorder)