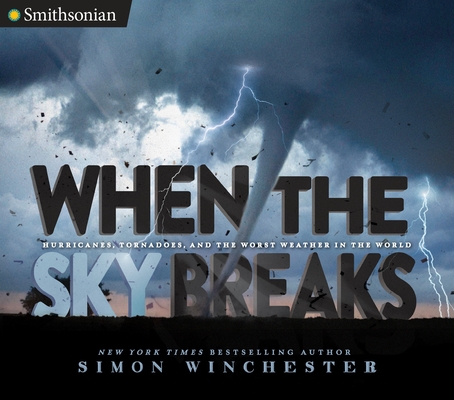 When the Sky Breaks

Hurricanes, Tornadoes, and the Worst Weather in the World (Smithsonian)

Simon Winchester is an avid weather watcher. He’s scanned the skies in Oklahoma, waiting for the ominous “finger” of a tornado to touch the Earth. He’s hunkered down in Hong Kong when typhoon warning signals went up. He’s visited the world’s hottest and wettest places, reported on fierce whirlpools, and sailed around South Africa looking for freak winds and waves.

He knows about the worst weather in the world.

A master nonfiction storyteller, Winchester looks at how, when, where, and why hurricanes, typhoons, cyclones, and tornadoes start brewing, how they build, and what happens when these giant storms hit. His lively narrative also includes an historical look at how we learned about weather systems and where we’re headed because of climate change. Stunning photographs illustrate the power of these giant storms.

Praise For When the Sky Breaks: Hurricanes, Tornadoes, and the Worst Weather in the World (Smithsonian)…

★ "Each section is introduced with a stunning photographic spread, and the text is broken up with clearly captioned photographs . . . Stormy weather elegantly explained." —Kirkus Reviews, starred review

Praise for When the Earth Shakes:

★ “Powerful writing. . . The visuals, too, are strong. Spectacular photographs are included. . . A must-buy for libraries serving middle school, this title works both as a basic overview of earth science and as a fine example of how to incorporate personal narrative into nonfiction.” —School Library Journal, starred review

“Simon Winchester never disappoints . . . Inspiring and engaging.” —Tom Brokaw on The Men Who United the States

"Elegant and scrupulous." —New York Times Book Review on The Professor and the Madman

"Winchester brings a knowledge as vast and deep as his subject to this history of the Atlantic Ocean." —Entertainment Weekly on Atlantic

"As with every book he's written and narrated, Winchester makes abstruse subjects available and fascinating for every reader and listener." —Publishers Weekly, starred review on The Man Who Loved China

Simon Winchester is the author of Viking’s When the Earth Shakes: Earthquakes, Volcanoes, and Tsunamis, a 2016 NSTA-CBC Outstanding Science Trade Book. He is the New York Times bestselling author of adult nonfiction, including Pacific; Atlantic; The Men Who United the States; and The Professor and the Madman. Winchester was awarded an Order of the British Empire (OBE) for his services to journalism and literature. Read more about him at simonwinchester.com
Loading...
or
Not Currently Available for Direct Purchase