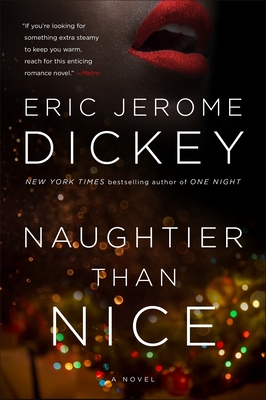 The lives of Frankie, Tommie, and Livvy McBroom haven't turned out quite as planned.

Frankie has a pair of stalkers, and she calls upon Driver, an ex-con, to bail her out of a potentially life-threatening situation...

Tommie and her long-time love Blue are now engaged, but due to something her more-mature fiancé has done, the wedding is indefinitely on hold, and Tommie has found herself captivated by to a younger man...

Livvy is unable to overcome the psychological barrier caused by her husband Tony’s affair. Their rare relations are by her rules and under certain conditions—it has to be a ménage à trois...

Though as close as any sisters could be, none wants the other two to know the dark secrets she is hiding. And during this season, all of the McBroom sisters are Naughtier than Nice.

Eric Jerome Dickey is the New York Times bestselling author of more than twenty previous novels as well as a six-issue miniseries of graphic novels featuring Storm (X-Men) and the Black Panther. Originally from Memphis, Dickey now lives on the road and rests in whatever hotel will have him.

Praise For Naughtier Than Nice…

Praise for Naughtier Than Nice

“If you’re looking for something extra steamy to keep you warm, reach for this enticing romance novel.”—Metro

“Dickey has deft control of each voice, and the Los Angeles backdrop is so well drawn that it becomes a character in its own right."—Publishers Weekly

“[A] steamy tale of lustful women troubled in love....Dickey's fans will rejoice.”—Kirkus Reviews

“A thrilling ending and loads of hot sexual gymnastics will draw Dickey’s many fans.”—Library Journal

“A very funny and engrossing novel....Plenty of the laugh-out-loud humor that has made Dickey’s work a staple on bestseller lists.”—Booklist

“Dickey is a master at writing about women and what they want and how they want it. There are three kinds of physical love in these pages: hot, red hot, and nuclear.”—Publishers Weekly