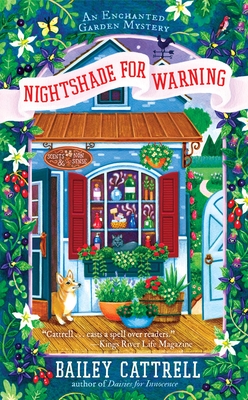 Elliana Allbright’s custom-made perfume shop and the Enchanted Garden behind it are garnering all sorts of attention, but a dead body could bury her in bad publicity. . . .

Ellie’s business and personal life have been flourishing in her hometown of Poppyville, California, since she opened Scents & Nonsense. She uses her very special skills to craft perfumes that almost magically ease heartache, inspire change, and bring joy—and her customers love to relax in the beautiful garden behind her shop with her corgi, Dash, and her cat, Nabokov. She even lives right next to the garden, in a compact “tiny house”—and she’s excited to hear that a journalist is going to write a feature about her home and garden for a national magazine.

But then the journalist is found dead, and suspicion falls on the last person to see him—who just happens to be Ellie’s brother’s girlfriend. So before everything goes to seed, Ellie must rely on her powers—observational and otherwise—to pick out the real killer from an ever-expanding bouquet of culprits. . . .


Praise For Nightshade for Warning (An Enchanted Garden Mystery #2)…

Praise for Daisies for Innocence

“Cattrell...casts a spell over readers with this charming mystery filled with likable characters and funny dialogue.”—Kings River Life Magazine

“The wrap up puts a smile on your face and leaves you disappointed to leave Poppyville and Elliana's mesmerizing garden. Rating: Near Perfect.”—Mysteries and My Musings

“Daisies for Innocence is the first book in the Enchanted Garden Mystery series and I'm officially hooked! I love the ambiance Bailey Cattrell creates, and I'm ready to revisit Poppyville, California!”—Fresh Fiction

“Daisies for Innocence is masterfully composed, and Cattrell enchantingly infuses the novel with lessons on the language of flowers and the lore of perfumery.”—Mystery Scene Magazine

Bailey Cattrell is the author of the Enchanted Garden Mysteries, including Daisies for Innocence. She believes magic is all around us if we only look for it. After earning degrees in philosophy and English, she held a variety of positions ranging from driver's license examiner to soap maker. She traveled the world as a localization program manager, but now sticks close to home, where she writes, cooks, and tends to a dozen garden beds. Bailey resides in Colorado with her guy and two felines: Cheesecat the Orange and Minerva the asthmatic wonder kitty.
Loading...
or
Not Currently Available for Direct Purchase