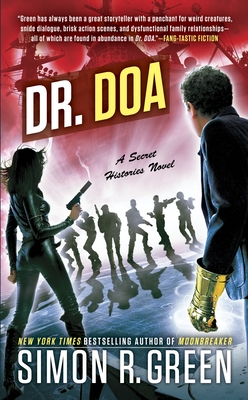 From the New York Times bestselling author of From a Drood to a Kill comes the next Secret Histories adventure, now in paperback!

The name is Drood, Eddie Drood, also known as Shaman Bond. My family has been safeguarding humanity for generations, facing the hidden horrors of the world so you can sleep at night and remain oblivious to the existence of the monstrous nightmares among us.

Speaking of predatory night terrors, there is a man who gets away with murder. A man who specializes in removing the problems from other people’s lives by killing the people who cause those problems. He operates from the darkest shadows of the hidden world, coming and going unseen. No one knows who he is, just his nom de mort: Dr. DOA.

Somehow this demented doc poisoned me. I don’t know how he did it, when or where, but whatever is coursing through my veins seems to be immune to magic cures and treatments. But that’s not going to stop me from finding him and whoever hired him and giving them both a taste of their own medicine....

“I love going on adventures with Eddie Drood...Simon R. Green takes the superhero/spy tropes and turns them upside down.”—Fresh Fiction

Simon R. Green is the New York Times bestselling author of the Secret Histories Novels, the Novels of the Nightside, the Ghost Finders Novels, and the Deathstalker series. He lives in England.
Loading...
or
Not Currently Available for Direct Purchase