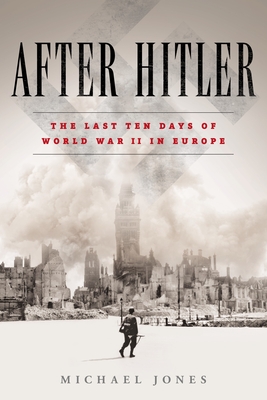 The Last Ten Days of World War II in Europe

Ten days that changed the course of history.

On April 30, 1945, Adolf Hitler committed suicide in a bunker in Berlin. But victory over the Nazi regime was not celebrated in western Europe until May 8, and in Russia a day later, on the ninth. Why did a peace agreement take so much time? How did this brutal, protracted conflict coalesce into its unlikely endgame?

After Hitler shines a light on ten fascinating days after that infamous suicide that changed the course of the twentieth century. Combining exhaustive research with masterfully paced storytelling, Michael Jones recounts the Führer’s frantic last stand; the devious maneuverings of his handpicked successor, Karl Dönitz; the grudging respect Joseph Stalin had for Churchill and FDR, as well as his distrust of Harry Truman; the bold negotiating by General Dwight D. Eisenhower that hastened Germany’s surrender but drew the ire of the Kremlin; the journalist who almost scuttled the cease-fire; and the thousands of ordinary British, American, and Russian soldiers caught in the swells of history, from the Red Army’s march on Berlin to the liberation of the Nazis’ remaining concentration camps. Through it all, Jones traces the shifting loyalties between East and West that sowed the seeds of the Cold War and nearly unraveled the Grand Alliance.

In this gripping, eloquent, and even-handed narrative, the spring of 1945 comes alive—a fascinating time when nothing was certain, and every second mattered.…


Praise For After Hitler: The Last Ten Days of World War II in Europe…

International Acclaim for After Hitler

“Michael Jones has described the death agonies of Nazism in an excellent, vivid and often moving narrative… He has deftly blended stories of great events and the great figures who shaped them with the experiences of the myriad men and women who carried out their orders. There is room too for the sufferings of millions of bewildered and frightened German refugees and displaced former slave workers endeavoring to return home.”—The Times of London

“[After Hitler is an] excellent new study of the death throes of the Third Reich. It is, at once, a tale of heroism and barbarism; of overwhelming triumph and abysmal defeat; of refugees and revenge; of a nightmare shattered and emerging hopes of a better future…. This is the best book of its genre since John Toland wrote The Last 100 Days.”—The Australian

“Ambitious… Michael Jones has woven together the many stories of those terrible ten days in a most compelling fashion.”—The Spectator

“Jones—a master of the vignette—provides an effective retelling of the story. Using an impressive selection of eyewitness accounts, he skips across Europe in that last week of the war—from Reims to Lüneburg, Prague to Flensburg—giving an engaging, lively summary of events.”—BBC History

“Admirable… the book’s strength lies in Jones’ well-crafted account of the complex negotiations over the pace, manner, and location of the surrender.”—Foreign Affairs

“[A] compact and well-written history of a period that is often neglected.”—The American Spectator

Michael Jones is a Fellow of the Royal Historical Society and a member of the British Commission for Military History. He is the author of eight previous books, including most recently The King’s Grave: The Search for Richard III; a series of works on World War Two’s eastern front culminating with Total War: From Stalingrad to Berlin; and Bosworth 1485: Psychology of a Battle, regarded as a seminal work on Richard III and the battle of Bosworth. Jones lives in England.