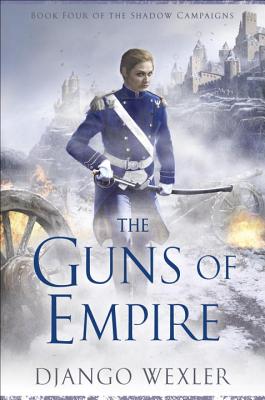 The Guns of Empire (The Shadow Campaigns #4)

As the “audacious and subversive”* Shadow Campaigns novels continue, the weather is growing warmer, but the frosty threat of Vordan’s enemies is only growing worse...

As the roar of the guns subsides and the smoke of battle clears, the country of Vordan is offered a fragile peace…

After their shattering defeats at the hands of brilliant General Janus bet Vhalnich, the opposing powers have called all sides to the negotiating table in hopes of securing an end to the war. Queen Raesinia of Vordan is anxious to see the return of peace, but Janus insists that any peace with the implacable Sworn Church of Elysium is doomed to fail. For their Priests of the Black, there can be no truce with heretics and demons they seek to destroy, and the war is to the death.

Soldiers Marcus d’Ivoire and Winter Ihernglass find themselves caught between their general and their queen. Now, each must decide which leader truly commands their loyalty—and what price they might pay for final victory.

And in the depths of Elysium, a malign force is rising—and defeating it might mean making sacrifices beyond anything they have ever imagined.

Praise For The Guns of Empire (The Shadow Campaigns #4)…

Praise for The Guns of Empire

"Another excellently entertaining novel, filled with battles and politics and personalities...It subverts, interrogates, or outright inverts a good few tropes associated with epic fantasy, and with gender roles."—Tor.com

"The Guns of Empire...only serves to further cement Django Wexler as one of the best authors currently writing, and his work as truly spellbinding."—Fantasy Book Review

Praise for the Shadow Campaigns Novels

“A fascinating world of dust and bayonets and muskets...and magic.”—S.M. Stirling, New York Times Bestselling Author of the Novels of the Change

“Succeeding volumes may end up doing for the Napoleonic Wars what George R.R. Martin did for the Wars of the Roses. Highly recommended.”—Anthony Ryan, New York Times Bestselling Author of the Raven’s Shadow Novels

“Without a doubt, the best book of its year.”—Simon R. Green, New York Times Bestselling Author of the Secret Histories Novels