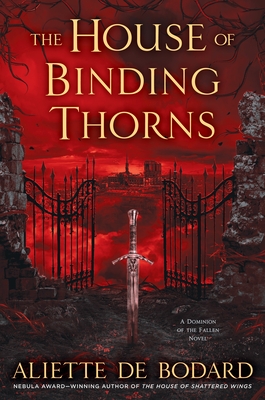 The multi-award-winning author of The House of Shattered Wings continues her Dominion of the Fallen saga as Paris endures the aftermath of a devastating arcane war....

As the city rebuilds from the onslaught of sorcery that nearly destroyed it, the great Houses of Paris, ruled by Fallen angels, still contest one another for control over the capital.

House Silverspires was once the most powerful, but just as it sought to rise again, an ancient evil brought it low. Phillippe, an immortal who escaped the carnage, has a singular goal—to resurrect someone he lost. But the cost of such magic might be more than he can bear.

In House Hawthorn, Madeleine the alchemist has had her addiction to angel essence savagely broken. Struggling to live on, she is forced on a perilous diplomatic mission to the underwater dragon kingdom—and finds herself in the midst of intrigues that have already caused one previous emissary to mysteriously disappear....

As the Houses seek a peace more devastating than war, those caught between new fears and old hatreds must find strength—or fall prey to a magic that seeks to bind all to its will.

Praise for The House of Binding Thorns

“If reading [The House of Binding Thorns] is sometimes walking the unfenced edge of a cliff, the vista is dizzying and beautiful.”—Fantasy & Science Fiction

“This affective sequel to 2015’s The House of Shattered Wings touches the heart as often as it cuts throats.”—Publishers Weekly (starred review)

Praise for The House of Shattered Wings

“The devastated Paris of Aliette de Bodard’s novel is especially haunting…A series of mysterious deaths turns the novel into a surprising but compelling murder mystery, which plays out according to the supernatural terms de Bodard has laid out so evocatively.”—The Chicago Tribune

“The House of Shattered Wings exists in a rich, evocative Paris that is thick with magical history. Pathos and beauty intertwine in a novel filled with longing.”—Mary Robinette Kowal, Multiple-Hugo award winning author of the Glamourist Histories

“A Gothic masterpiece of supernatural intrigues, loves and betrayals in a ruined and decadent future Paris—wildly imaginative and completely convincing, this novel will haunt you long after you’ve put it down.”—Tim Powers, author of The Anubis Gates

“Gripping...reads like a hybrid of le Carre and Milton, all tinged with the melancholy of golden ages lost.”—Publishers Weekly (starred review)

“A novel that is both haunting and original, its sense of loss almost palpable, and its setting not quite anything else in modern fantasy.”—Locus

“It’s a grim story with high-flown conventions, but by finding so much ugliness even in supernatural beauty, de Bodard makes both seem more compelling, and more concrete.”—NPR.com

Aliette de Bodard is an engineer, a writer, and a keen amateur cook. Her love of mythology and history led her to speculative fiction early on. She is the author of The House of Shattered Wings, the first Dominion of the Fallen Novel, plus numerous short stories, the Aztec noir trilogy Obsidian and Blood, and the award-nominated On a Red Station, Drifting, a space opera based on Vietnamese culture. She has won two Nebula Awards and a Locus Award.
Loading...
or
Not Currently Available for Direct Purchase