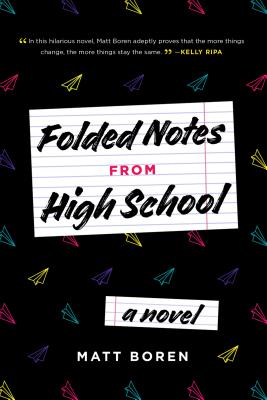 A status-obsessed senior unexpectedly falls for a freshman because of his Danny Zuko audition in their high school's production of Grease in this outrageously funny epistolary novel set in 1991.

"Matt Boren brilliantly captures the voices of students way back in 1992 with humor and wit and a unique ability to shift from freshman to senior, boy to girl, cheerleader to theater geek. In this hilarious novel, Boren adeptly proves that the more things change, the more things stay the same."
--Kelly Ripa

It's 1991, and Tara Maureen Murphy is finally on top. A frightening cross between Regina George and Tracy Flick, Tara Maureen Murphy is any high school's worst nightmare, bringing single-minded ambition, narcissism, manipulation, and jealousy to new extremes in this outrageous, satirical twist on the coming-of-age novel. She's got a hot jock boyfriend in Christopher Patrick Caparelli, her best friend Stef Campbell by her side, and she's a SENIOR, poised to star as Sandy in South High's production of Grease. Clinching the role is just one teensy step in Tara's plot to get out of her hometown and become the Broadway starlet she was born to be. She's grasping distance from the finish line--graduation and college are right around the corner--but she has to remain vigilant.

"This dumb town, as we know, can be a very tricky place." --Tara Maureen Murphy

It gets trickier with the arrival of freshman Matthew Bloom, whose dazzling audition for the role of Danny Zuko turns Tara's world upside down. Freshmen belong in the chorus, not the spotlight! But Tara's outrage is tinged with an unfamiliar emotion, at least to her: adoration. And what starts as a conniving ploy to "mentor" young Matt quickly turns into a romantic obsession that threatens to topple Tara's hard-won status at South High....

Matt Boren has written on over eighty-five episodes of television for Melissa and Joey, See Dad Run, Sofia the First, among others. Boren has acted in many projects in both film and television, including for nine seasons as Stuart on How I Met Your Mother. He lives in Los Angeles, CA, with his family. Folded Notes from High School is his first novel. Follow him on Twitter @Borentown

"Matt Boren brilliantly captures the voices of students way back in 1992 with humor and wit and a unique ability to shift from freshman to senior, boy to girl, cheerleader to theater geek. In this hilarious novel, Boren adeptly proves that the more things change, the more things stay the same."–Kelly Ripa

"Folded Notes from High School is heartwarming, hilarious storytelling that might give you some uncomfortable pangs of recognition. This is how you love, scheme, fight and forgive in the high heat of puberty." —Patton Oswalt

"This tale about Tara’s over-the-top rise and demise has a playful retro pop culture context....Readers will love to hate the talented and terrible Tara." —School Library Journal

"In a novel that captures the lingo, fads, and teenage preoccupations of the period, actor and TV writer Boren makes a charismatic debut as he traces the ups and downs of Tara Maureen Murphy’s life....Even if she doesn’t win readers’ hearts, [Tara] will make them smile with her conniving antics, sarcastic wit, and tremendous resiliency." —Publishers Weekly

"Folded Notes from High School is the ‘90s YA novel you’ve been waiting for....This one’s for all the readers who fawned over both Danny Zuko and Aaron Samuels." —HelloGiggles

"If a '90s Regina George exchanged notes with a freshman boy in school, this would be it."–PopSugar

"Folded Notes from High School is like a portal into the lives of teenagers past. It's a hilarious tale of one girl trying to be good at life, and relatably failing time and time again." —Adi Alsaid, author of Let's Get Lost and Never Always Sometimes

“Set in 1991, Folded Notes from High School transports readers back in time to a high school filled with a little less technology but no less drama.” –VOYA

“In the age before Snapchat and Instagram, Tara Murphy rules South High’s social scene armed with only her pen and strategically hidden notes…a great read for slightly older teens who want a glimpse into the increasingly distant—though not so different—past.” —Booklist
or
Buy Here
Copyright © 2020 American Booksellers Association