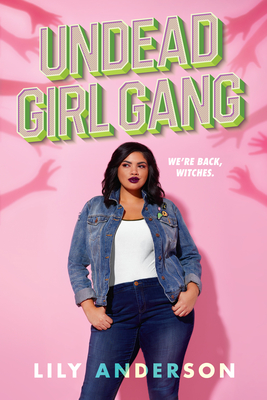 "A fun, fast read . . . it will resonate with readers who dabble in any sort of arts, dark or otherwise." --NPR.org

"With a singular and hilariously cutting teen voice, Undead Girl Gang is sure to be one of the most talked-about YA novels of the year." --BookPage

Unfortunately, Riley, June, and Dayton have no recollection of their murders. But they do have unfinished business to attend to. Now, with only seven days until the spell wears off and the girls return to their graves, Mila must wrangle the distracted group of undead teens and work fast to discover their murderer . . . before the killer strikes again.

"Undead Girl Gang is a grand spell of a book. One part revenge, two parts twisted friendship, all parts undead girl glory—with a dash of wicked romance. If you mixed Hocus Pocus, Mean Girls, and The Craft, this would be the bewitching result." —Cori McCarthy, author of Breaking Sky, You Were Here, and Now A Major Motion Picture

Lily Anderson is a school librarian and Melvil Dewey fangirl with an ever-growing collection of musical theater tattoos and Harry Potter ephemera. She lives in Northern California. She is also the author of The Only Thing Worse Than Me Is You and Not Now, Not Ever. She tweets @ms_lilyanderson.
Loading...
or support indie stores by buying on
(This book is on backorder)