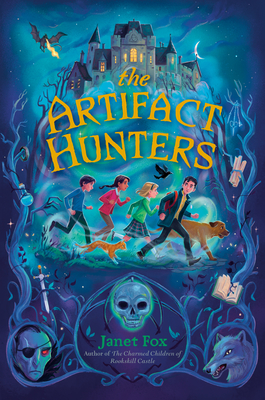 Isaac Wolf can travel through time. But he's also in a race against it.

With tensions in Prague rising at the height of World War II, Isaac Wolf is forced to leave home with nothing more than a small backpack and a pendant in the shape of an eternity knot. His parents believe the pendant will keep him safe--if he can discover what it really means.

This clue leads him to Rookskill Castle, home of the Special Alternative Intelligence Unit where gifted children can learn to harness their powers to support the Allies' cause. With the help of his new friends and an antique watch that allows him to travel through time, Isaac must unlock his own powers and uncover the true meaning of the eternity knot. The only way he can do that, though, is by hunting for a series of magical artifacts that are scattered throughout the past . . . and Isaac isn't the only artifact hunter. Soon he finds himself in a race against a threat just as deadly as the war itself--one that his parents had been trying to shield him from all along.

Praise For The Artifact Hunters…

"An intricately woven tale full of action, menace and historical twists, Janet Fox reminds readers that friendship can overcome even the most powerful of evils." —Kim Ventrella, author of Skeleton Tree and Bone Hollow

"Grabbed my attention from page one and would not let go." —Jennifer A. Nielsen, New York Times and USA Today bestselling author of The False Prince

"Janet Fox taps into her superior story-telling skills. With masterful artistry, she has given us another spine-tingler." —Kathi Appelt, author of Angel Thieves

"A companion novel to The Charmed Children of Rookskill Castle (2016), this is a joyful middle-grade adventure set against the backdrop of WWII . . . t's easy to root for them against the scary creatures of the night." —Booklist Reviews

The Charmed Children of Rookskill Castle

* "Fox works a spell of her own." —Shelf Awareness, starred review

* "Wonderfully written . . . Readers will curl up and keep the lights on." —Booklist, starred review

Janet Fox writes award-winning fiction and non-fiction for children of all ages. Her published works include GET ORGANIZED WITHOUT LOSING IT (Free Spirit, new edition 2017), and the YA novels FAITHFUL, FORGIVEN, and SIRENS (all from Penguin). THE CHARMED CHILDREN OF ROOKSKILL CASTLE (Viking, 2016), her middle grade debut, received starred reviews from Kirkus, Booklist, Publishers Weekly, and Shelf Awareness, is on numerous lists, and received SCBWI's Crystal Kite award. VOLCANO DREAMS (Web of Life Books, 2018) is her debut picture book. A companion novel to CHARMED CHILDREN is due out from Viking in 2020. Janet is a former high school teacher and a 2010 graduate of Vermont College of Fine Arts. She's represented by Erin Murphy, Erin Murphy Literary Agency. Find out more at www.janetsfox.com.
Loading...
or support indie stores by buying on