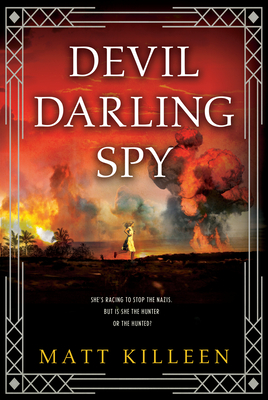 In this utterly gripping thriller, Sarah, the fearless heroine of indie bestseller Orphan Monster Spy, hunts a rogue German doctor in Central Africa who might be a serial murderer.

It's 1940, and Sarah Goldstein is hiding in plain sight as Ursula Haller, the Shirley Temple of Nazi high society. She helps the resistance by spying on Nazi generals at cocktail parties in Berlin, but she yearns to do more. Then the spy she works for, the Captain, gets word of a German doctor who's gone rogue in Central Africa. Rumors say the doctor is experimenting with a weapon of germ warfare so deadly it could wipe out entire cities. It's up to the Captain and Sarah to reach the doctor and seize this weapon--known as "the Bleeding"--before the Nazis can use it to murder thousands. Joining them on their journey, in of the guise of a servant, is Clementine, a half-German, half-Senegalese girl, whose wit and ferocity are a perfect match for Sarah's. As they travel through the areas now known as the Republic of the Congo and Gabon, Clementine's astute observations force Sarah to face a hard truth: that mass extermination didn't start with the Nazis.

This unbearably high-stakes thriller pushes Sarah to face the worst that humanity is capable of--and challenges her to find reasons to keep fighting.

Matt Killeen was born in Birmingham, in the UK, back in the war-mad seventies--a hometown largely demolished and rebuilt in his lengthy absence. People tend to dismiss what comes more easily to them as unworthy, so it took him far too long to realize he was a writer. He worked as an advertising copywriter and largely ignored music and sports journalist in the noughties, before fulfilling a childhood dream to join the LEGO® Group in 2010. He left after eight years, and an unconscionable amount of money spent in the staff store, to become a full-time author. A lover of costume parties, he is an avid gamer, soccer fan, toddler wrangler, and warrior for truth and social justice. Although a devout urbanite, he has somehow ended up surrounded by fields in a house full of LEGO® bricks and musical instruments, with his two diversely aged children, Nuyorican soul mate, and neurotic, fluffy dog. Orphan Monster Spy was his debut novel, and he has still not learned to touch-type.
Loading...
or support indie stores by buying on