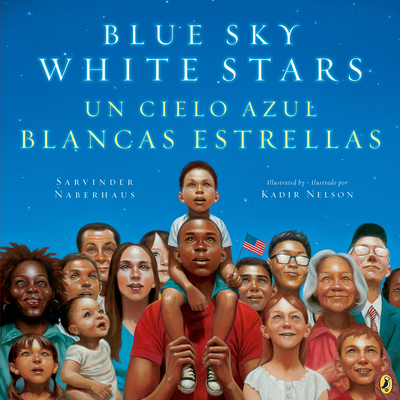 An inspiring tribute to the beauty and meaning of the American flag, a symbol of America's history and people, illustrated by New York Times bestselling and Caldecott-honor winning artist Kadir Nelson--now available with text in Spanish and English.

Wonderfully spare, deceptively simple verses pair with richly evocative paintings to celebrate the iconic imagery of our nation, beginning with the American flag. Each spread, sumptuously illustrated by award-winning artist Kadir Nelson, depicts a stirring tableau, from the view of the Statue of Library at Ellis Island to civil rights marchers shoulder to shoulder, to a spacecraft at Cape Canaveral blasting off. This book is an ode to America then and now, from sea to shining sea, and is now accessible to a much larger audience in this bilingual edition.

Sarvinder Naberhaus is the author of Boom Boom and the forthcoming Lines. She was born in India and grew up in the heartland. The American flag provided the inspiration for the imagery in Blue Sky White Stars. She lives in Iowa with her family.