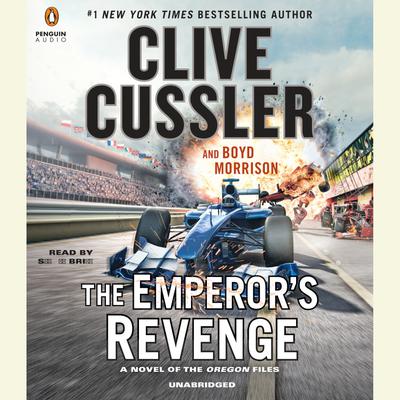 When a bank heist during the Monaco Grand Priz decimates the Corporation’s “offshore” account, Juan Cabrillo and the crew of the Oregon find themselves unexpectedly vulnerable. Without his usual financial assets, Juan must trust a woman from his past, an old friend from his days with the CIA, to help him keep his team safe. Together, they’ll face a mysterious hacker with a brutal vendetta. It is only after the hunt begins that the enormity of the plan comes into focus: the bank theft is just the first step in a plot that will result in the deaths of millions and bring the world’s economies to a standstill. The catalyst for the scheme? A stunning document stolen during Napoleon’s disastrous invasion of Russia. But two hundred years later, it may be the thing that brings Europe to its knees.

CLIVE CUSSLER is the author of more than fifty books in five bestselling series, including Dirk Pitt, NUMA Files, Oregon Files, Isaac Bell, and Sam and Remi Fargo. His life nearly parallels that of his hero Dirk Pitt. Whether searching for lost aircraft or leading expeditions to find famous shipwrecks, he and his NUMA crew of volunteers have discovered more than seventy-five lost ships of historic significance, including the long-lost Confederate submarine Hunley, which was raised in 2000 with much press publicity. Like Pitt, Cussler collects classic automobiles. His collection features eighty examples of custom coachwork. Cussler lives in Arizona and Colorado.

BOYD MORRISON is the author of six adventures, including the four Tyler Locke novels, most recently The Roswell Conspiracy and The Loch Ness Legacy. He is also an actor and engineer, with a doctorate in engineering from Virginia Tech, who has worked on NASA’s space station project at Johnson Space Center and developed several patents at Thomson/RCA. In 2003, he fulfilled a lifelong dream by becoming a Jeopardy! champion. Morrison lives in Seattle.