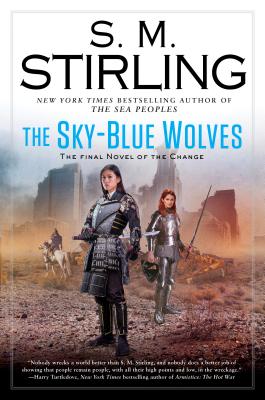 The Sky-Blue Wolves (A Novel of the Change #15)

S. M. Stirling presents the stunning and epic conclusion to the New York Times bestselling Change series, now in paperback. Many years ago, when advanced technology failed and humanity found itself in a turbulent, postapocalyptic world, extraordinary men and women birthed a new society from the ashes.

Two generations after the Change, Crown Princess Órlaith struggles to preserve the hard-won peace her father brought to Montival—the former western North America. But the Change opened many doors, and through them Powers strong and strange and terrible came, to walk once more among humankind.

With her fire-forged friend and ally, Japanese Empress Reiko, Órlaith must take up her sword to stop the spread of the mad malignancy behind the Yellow Raja, who has imprisoned her brother Prince John. And from the emerging superpower of Mongolia, the Sky-Blue Wolves of the High Steppe ride once more beneath the banner of Genghis Khan—the thunder of their hooves resounding across a world in turmoil.

"[A] richly realized story of swordplay and intrigue."--Entertainment Weekly

"Nobody wrecks a world better than S. M. Stirling, and nobody does a better job of showing that people remain people, with all their high points and low, in the wreckage."--Harry Turtledove, New York Times bestselling author of Joe Steele

"[A] vivid portrait of a world gone insane...full of bloody action, exposition that expands character, and telling detail that makes it all seem very real."--Statesman Journal (Salem, OR)

S. M. Stirling is the author of many science fiction and fantasy novels. A former lawyer and an amateur historian, he lives with his wife, Jan.
Loading...
or
Not Currently Available for Direct Purchase