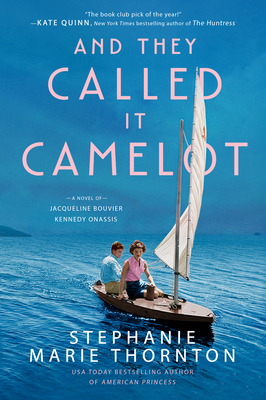 And They Called It Camelot

“An extraordinary profile of the courage and grace of the indomitable Jacqueline Bouvier Kennedy Onassis, And They Called it Camelot is impeccably researched and richly drawn. Thornton celebrates the former First Lady’s life in a sweeping account filled with poignant intimacy. Readers are instantly transported to Jackie’s version of Camelot as they immerse themselves in the fascinating and tumultuous history of the times. An unputdownable, unforgettable read.”—Chanel Cleeton, New York Times bestselling author of Next Year in Havana, on And They Called It Camelot

“Addictive, dishy, and emotionally haunting, this novel paints an intimate portrait of a tumultuous marriage that played out on the world's stage and ended in national tragedy.  Loving and losing one of history's most charismatic American presidents marks Jaqueline Kennedy's life ever after, but oh, how she rises up from the ashes. Vivid, engrossing, and utterly unforgettable, And They Called It Camelot is Thornton's best work yet.” —Stephanie Dray, New York Times bestselling coauthor of America's First Daughter, on And They Called It Camelot

“Jacqueline Kennedy Onassis leaves an enduring (and intimidating) legacy; for a writer, finding something new and meaningful to say about her is a daunting task. Thornton harnesses her immense talent for historical fiction and combines it with a biographer's immersive research to create a rich portrait that is both intimate and thoughtful while also wildly addictive. I tore through these pages and you will too. Thornton gifts her readers with a fresh appreciation for the indomitable woman behind the iconic sunglasses.” —Steven Rowley, author of The Editor, on And They Called It Camelot

"In her rich, fascinating account of Jacqueline Bouvier Kennedy Onassis’ life, author Stephanie Marie Thornton effortlessly transports us back in time….A powerful and uplifting portrayal.”—Woman’s World, on And They Called It Camelot

“Thornton captures a celebrity with whom the world mourned in November 1963, but her down-to-earth approach has given us the opportunity for a more intimate and less sensational look at Jackie, the wife and mother. Highly recommended.”—Historical Novel Society

“Even if you think you know the story of Jacqueline Bouvier Kennedy Onassis, you’re in for rare behind-the-scenes look at the former First Lady’s life.  Stephanie Thornton has channeled this iconic woman and delivers such an intimate portrait, at times I had to remind myself that this is a novel and not Kennedy’s own memoir. Such an ambitious undertaking and Thornton not only pulls it off, she hits it out of the park. This book is nothing short of magical.”—Renee Rosen, Author of Park Avenue Summer, on And They Called It Camelot

“This book grabbed me from page one and wouldn’t let me go. A multi-dimensional imagining of the trials and triumphs of Jaqueline Bouvier Kennedy, And They Called It Camelot will make you rethink everything you thought you knew about this remarkable First Lady. Full of glamour, scandal, and heartache, this is a novel you will want to discuss with all of your friends.”—Kerri Maher, Author of The Girl in White Gloves, on And They Called It Camelot

“Students of history will appreciate Thornton’s exacting research and convincing portrayal of the first lady and style icon, and Kennedy aficionados will feel as if they have an unparalleled access to Camelot. Thornton’s magnificent portrayal of Onassis will delight fans of Kennedy-related fiction.”—Publishers Weekly (Starred Review), on And They Called It Camelot

“And They Called It Camelot is a sumptuous, propulsive, scandal-filled peek behind the curtain of American royalty. Thornton gives the reader a fascinating look at the masks worn by those who live in the public life. One might not agree with all of Jackie’s choices, but the force of her instinct for survival cannot be denied.” —Erika Robuck, National bestselling author of Hemingway’s Girl, on And They Called It Camelot

“Her Jackie steps out of the pages a convincing, three-dimensional character, complete with contradictions and self-doubt. It’s like reading her private diary – witty, warm and full of color. The shining heart of the novel is her love for (and frustration with) Jack, who is described as a golden figure, so sexy any of us would swoon at his feet. Their attraction is tangible and sizzling hot. All the way through, Stephanie’s writing is vivid, with lots of memorable images (like those lemon-lipped Rah-Rah Sisters!). I’m going to have to go back and read it all again in a few weeks.” —Gill Paul, Author of The Lost Daughter, on And They Called It Camelot

“And They Called It Camelot, by Stephanie Marie Thornton, is simply spellbinding. This intimate story of Jacqueline Bouvier Kennedy Onassis portrays a woman finding her way in a landscape dominated by men, and, with grace and astounding resilience, forging an identity the world will never forget. A tale of love and devastation, greatness and sacrifice, this remarkable novel will grip readers until the last page.”—Kristin Beck, Author of Courage, My Love, on And They Called It Camelot

"Readers will enjoy this heartbreaking story of a wife’s fierce pride and loyalty to her president and country, despite years of marital loneliness and loss."—Library Journal, on And They Called It Camelot

“Thornton brings Jackie’s compelling voice to life.”—BookTrib, on And They Called It Camelot

“Tackling a larger-than-life person such as Jackie Kennedy is a daunting undertaking, and Stephanie Marie Thornton handles that challenge splendidly. Thornton’s decision to have Jackie narrate her own story lends an intimate feel to the tale…a fascinating and personal portrait of one of America’s most iconic women."—Bookreporter, on And They Called It Camelot

“An absorbing portrait of a woman who lived life on her own terms.”—Booklist

“Readers will be enthralled by Alice’s wit and adventures...as Thornton expertly weaves the events of her life.”—Library Journal

Stephanie Marie Thornton is the USA Today bestselling author of American Princess and a high school history teacher. She lives in Alaska with her husband and daughter.
Loading...
or support indie stores by buying on