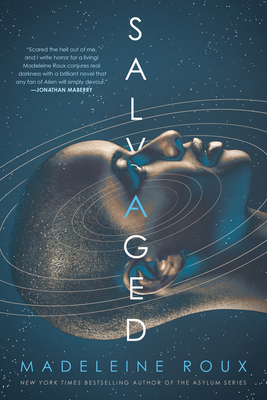 A WOMAN ON THE RUN. A CAPTAIN ADRIFT IN SPACE. ONE OF THEM IS INFECTED WITH AN ALIEN PARASITE.

In this dark science fiction thriller, a young woman must confront her past so the human race will have a future.

Rosalyn Devar is on the run from her famous family, the bioengineering job she's come to hate, and her messed-up life. She's run all the way to outer space, where she's taken a position as a "space janitor," cleaning up ill-fated research expeditions. But no matter how far she goes, Rosalyn can't escape herself. After too many mistakes on the job, she's given one last chance: take care of salvaging the Brigantine, a research vessel that has gone dark, with all crew aboard thought dead.

But the Brigantine's crew are very much alive--if not entirely human. Now Rosalyn is trapped on board, alone with a crew infected by a mysterious parasitic alien. The captain, Edison Aries, seems to still maintain some control over himself and the crew, but he won't be able to keep fighting much longer. Rosalyn and Edison must find a way to stop the parasite's onslaught...or it may take over the entire human race.

“Salvaged scared the hell out of me, and I write horror for a living! Madeleine Roux conjures real darkness with a brilliant novel that any fan of ALIEN will simply devour. Brava!”--Jonathan Maberry, New York Times bestselling author of V-Wars and Rage

"Elegant and inevitable, this is the prose equivalent of playing a survival horror game.  Each piece feeds perfectly into the next.  Beautifully written."—Seanan McGuire, New York Times Bestselling author of Middlegame

“Madeleine Roux’s Salvaged is a breathless, claustrophobic twist on the SF thriller, full of deep space dread, conspiracies, and malevolent alien spores, with a woman at the center whose courage was forged in all too human trauma. This is the ALIEN we need right now.”—Christopher Golden, New York Times bestselling author of Ararat and The Pandora Room

"Salvaged is riveting and brutal, a study in scars. The masterful writing and bittersweet beauty of these characters will haunt you long after you finish reading." –Ann Aguirre, New York Times bestselling author

"ALIEN meets THE EXPANSE in this nonstop thrill ride. Rosalyn is a reluctant heroine on the run from her past; trapped on a ship with a terrifying alien presence, her resourcefulness and courage lend this unconventional space opera depth and heart."--Michelle Gagnon, author of Unearthly Things

“Roux's Salvaged is a tale of creeping horror and daring love, heavy with the weight of loss and trauma. Spooky fungus in space, devastatingly intimate hive minds, terrifying resource management, and shockingly sweet romance combine in this love letter to redemption and recovery (and mushrooms)."—Caitlin Starling, author of The Luminous Dead


“Roux delivers a feminist SciFi with plot twists, gut-punches, and a female lead with the strength of resilience.”—Mindy McGinnis, Edgar-Award winning author of Heroine

“The rich description dumps you right into the world of Salvaged and won't let you go. Roux engages all senses; this is sometimes a good thing, sometimes bad, always brilliant. . . . I loved it! —Mur Lafferty, award-winning author of Six Wakes

"From its first searingly brutal line Madeleine Roux seizes the reader by their space helmet and drags them screaming and flailing up into the air ducts of this deeply engaging story of deep space horror. . . . Truly remarkable and unsettling in the best of ways."-- Jordan Shively, host of the podcast CARING INTO THE VOID

"This entertaining, deeply disturbing, and clever story hits all the right notes for those who like a little horror with their SF."--Publishers Weekly (starred review)

"[A] solid piece of survival horror in space. The tension and desperation of the situation meshes perfectly with the characters’ development as they struggle to stay themselves and survive."--Booklist

"Madeleine Roux's Salvaged is the fantastic sci-fi "Beauty & the Beast" story you've always needed in your life."--Peter Clines, author of The Fold

Madeleine Roux is the New York Times bestselling author of the Asylum series, which has sold into eleven countries around the world and whose first book was named a Teen Indie Next List Pick. She is also the author of the House of Furies series and has made contributions to Star Wars, World of Warcraft, and New Scary Stories to Tell in the Dark. A graduate of the Beloit College writing program, Madeleine now lives with her beloved dog in Seattle, Washington.
Loading...
or support indie stores by buying on