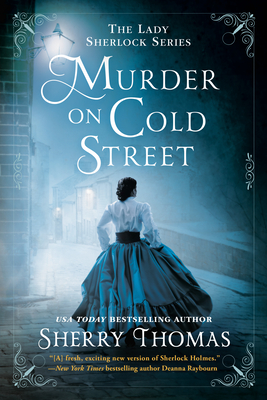 Inspector Treadles, Charlotte Holmes’s friend and collaborator, has been found locked in a room with two dead men, both of whom worked with his wife at the great manufacturing enterprise she has recently inherited.

Rumors fly. Had Inspector Treadles killed the men because they had opposed his wife’s initiatives at every turn? Had he killed in a fit of jealous rage, because he suspected Mrs. Treadles of harboring deeper feelings for one of the men? To make matters worse, he refuses to speak on his own behalf, despite the overwhelming evidence against him.

Charlotte finds herself in a case strewn with lies and secrets. But which lies are to cover up small sins, and which secrets would flay open a past better left forgotten? Not to mention, how can she concentrate on these murders, when Lord Ingram, her oldest friend and sometime lover, at last dangles before her the one thing she has always wanted?

Praise For Murder on Cold Street (The Lady Sherlock Series #5)…

"These books, which recast Sherlock Holmes as Charlotte Holmes, are perfect for those who adore layered stories. Unignorable questions of gender, expectation and privilege lurk beneath complex mysteries and a slowly scorching romance."--The Washington Post, on The Art of Theft

"Fast-paced storytelling and witty prose add further appeal for those who like their historical mysteries playful."--Publishers Weekly, on The Art of Theft

"Thoughtful yet brief remarks critique patriarchy, heteronormativity, and colonialism, fitting organically into an absorbing whodunwhat arc. An exciting addition to the mystery series; Holmes meets Ocean's 11 meets A Vindication of the Rights of Woman."--Kirkus Reviews (starred review), on The Art of Theft

Praise for The Hollow of Fear

"The resolution, as well as the spell cast by Thomas' language and clever use of disguise to reveal a devastating understanding of human flaws and desires, leaves one with a good book hangover. A novel in which you cannot wait to find out what happens next--even as you do not want it to end."--Kirkus Reviews (starred review)

"The mystery at the novel's heart is compelling...but it's once again the author's incisive and compassionate glimpses at how women survive the strictures of misogyny that place the book a cut above the rest."--The Austin Chronicle

"This spell-binding tale is the third in the Lady Sherlock Historical Mysteries and is even better (if possible) than the last. For those who have yet to experience this new "take" on the beloved Sherlock Holmes and the Victorian realm that never disappoints, this is a series you must start reading right now!"--Suspense Magazine

USA Today bestseller Sherry Thomas is one of the most acclaimed historical romance authors writing today and a two-time RITA award winner.
Loading...
or support indie stores by buying on