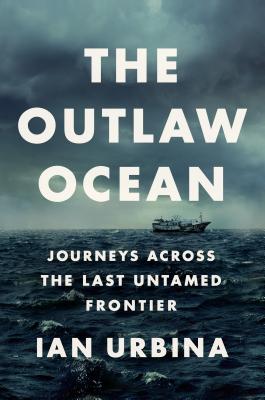 Journeys Across the Last Untamed Frontier

"A riveting, terrifying, thrilling story of a netherworld that few people know about, and fewer will ever see . . . The soul of this book is as wild as the ocean itself." --Susan Casey, best-selling author of The Wave: In Pursuit of the Rogues, Freaks, and Giants of the Ocean


An adrenaline-fueled tour of a vast, lawless and rampantly criminal world that few have ever seen: the high seas.

There are few remaining frontiers on our planet. But perhaps the wildest, and least understood, are the world's oceans: too big to police, and under no clear international authority, these immense regions of treacherous water play host to rampant criminality and exploitation.

Traffickers and smugglers, pirates and mercenaries, wreck thieves and repo men, vigilante conservationists and elusive poachers, seabound abortion providers, clandestine oil-dumpers, shackled slaves and cast-adrift stowaways -- drawing on five years of perilous and intrepid reporting, often hundreds of miles from shore, Ian Urbina introduces us to the inhabitants of this hidden world. Through their stories of astonishing courage and brutality, survival and tragedy, he uncovers a globe-spanning network of crime and exploitation that emanates from the fishing, oil and shipping industries, and on which the world's economies rely.

Both a gripping adventure story and a stunning exposé, this unique work of reportage brings fully into view for the first time the disturbing reality of a floating world that connects us all, a place where anyone can do anything because no one is watching.

Praise For The Outlaw Ocean: Journeys Across the Last Untamed Frontier…

"The Outlaw Ocean brings the reader up close to an overwhelming truth... An impressive feat of reporting... Urbina deftly reveals complicated ideas through his stories."
—The Washington Post

"This body of work is a devastating look at the corruption, exploitation, and trafficking that thrive on the open ocean... The writing is straightforward but clever... Eerie and beautiful."
—Outside

"The Outlaw Ocean is enriched by Urbina’s gifted storytelling about the destruction of marine life and the murder, crime, and piracy that make the seas so dangerous for those who make their living on them."
—The National Book Review

"What we learn from Urbina’s journeys is nothing less than the deepest aspects of humanity itself. Dropped into a world without terra firma’s systems and foibles, our darkest impulses emerge. But our most noble intentions—to save, to protect, to establish fair rule of law—appear as well."
—Paste

“In The Outlaw Ocean, Urbina focuses that eye on understanding his characters and their context to show why these crimes get committed and why the culprits rarely get prosecuted. Urbina goes further than most to do this. He shows you a problem from the front lines, by talking to the people there.”
—Vice

"New York Times journalist Ian Urbina explores a parallel world, spanning two thirds of the Earth’s surface but almost entirely hidden from public scrutiny... With the world’s seafood stocks in crisis, Urbina lifts the thick veil on a global criminal culture, at just the moment when the damage inflicted on the oceans is becoming terminal."
—The Guardian

"The most valuable contribution of The Outlaw Ocean may be to the literature, unfortunately quite extensive by now, of pessimism about human nature…in aggregate his stories reveal that something like a Hobbesian state of nature still exists and is available to anyone willing to float a few dozen miles offshore.”
—The Wall Street Journal

“The Outlaw Ocean is an outstanding example of investigative journalism, illuminating some of the darkest corners of a world we often don't think about… what he found ranges from horrible to shocking and from unfair to unbelievable… a magnificent read… proof that outstanding writing is still one of the best tools we have to get to know the world we live in.”
—Gabino Iglesias, NPR

“These chapters are vibrant as individual stories, but as a collection they’re transcendent, rendering a complex portrait of an unseen and disturbing world. Urbina pursues a depth of reportage that’s rare because of the guts and diligence it requires… The result is not just a fascinating read, but a truly important document… It is a master class in journalism.”
—Blair Braverman, The New York Times Book Review

"A fast-paced read, both riveting and harrowing."
—Civil Eats

"The scope of reporting in The Outlaw Ocean is remarkable. Urbina covers a wide swath of oceangoing banditry and mayhem, and delivers his findings in clear, transparent prose that brings this sordid activity to life."
—Lee Polevoi, Highbrow Magazine


“Not just a stunning read, this book is a gripping chronicle of the watery wild west and it shows us—frankly unlike anything I've read before—how global indifference can trap innocent people in endless cycles of exploitation, how the vast ocean has become a danger zone, and ultimately how we all pay a price for this mayhem and mistreatment."
—John Kerry, former Secretary of State and founder of the Our Ocean Conference

“Imagine a fantasy movie in which an explorer from Earth arrives on the surface of a living planet, to discover a lawless place where brutality is the only order and greed and fear the only motivators. Welcome to The Outlaw Ocean. In this utterly groundbreaking, often disturbing book, Ian Urbina has put his life on the line to lay bare the stunning inhumanity that reigns unchecked over two-thirds of Earth’s surface. This constantly astonishing book is seasoned with rare heroes—the author himself among them—who at great risk have weaponized their lifelong quest to shine righteous light and apply justice to the cruel anarchy that reigns over the majority of the planet.”
—Carl Safina, author of Beyond Words and Song for the Blue Ocean

“Our planet is 70% ocean and yet to watch the tv or read the papers you'd have little idea humans ever ventured offshore. Thanks to Ian Urbina for beginning to close the reporting gap, and for showing the high drama to be found on the high seas."
—Bill McKibben, author of Falter: Has the Human Game Begun to Play Itself Out?

"A swift-moving, often surprising account of the dangers that face sailors and nations alike on the lawless tide."
—Kirkus Reviews

“In The Outlaw Ocean, Ian Urbina offers a gripping series of portraits of scofflaws, renegades, con men, vigilantes and activists whose combat on the open seas has profound effect on our everyday lives and the world we inhabit. It’s a wild adventure story and terrifying cautionary tale, that should not be missed.”
— Sam Walker, former deputy enterprise editor of The Wall Street Journal and author of The Captain Class

"This is just incredible investigative work."
—Naomi Klein, author of This Changes Everything

Outlook Review
How lawlessness and ignorance are harming our oceans

Alyssa Rosenberg writes about culture and politics for The Washington Post’s Opinions section.

Fish swim in a reef near La Ciotat, France. Ian Urbina argues that most of us don’t know much about what takes place in and around the oceans, from overfishing to slavery. (BORIS HORVAT/AFP/Getty Images)

The remote is now very near: Mount Everest has traffic jams, and Instagram influencers are posing at Chernobyl. The Google Car maps where we live, photographing our homes usually when the lawn is unkempt. The world has never felt smaller or more known, for good and ill.

Into that world comes Ian Urbina’s “The Outlaw Ocean” bearing an unsettling idea: There is still much we don’t know about our world, and the consequences of our ignorance are likely to arrive onshore not in a gentle swell but with crashing force. Urbina argues that the vast oceans and their borders with land are changing more quickly than we can imagine. The wide expanses of the sea are ungoverned, if not ungovernable, because it benefits too many powerful people to let them stay that way. The result is a book that leaves behind the unnerving feeling that we’re becalmed and can move in no positive direction: “The Outlaw Ocean” brings the reader up close to an overwhelming truth, but the magnitude of the revelation is paralyzing.

The book grew out of Urbina’s reporting about the sea for the New York Times, and as a result, it is constructed as a series of seafaring yarns. The installments vary wildly in tone, as you might expect in the nautical genre of storytelling. Max Hardberger, a raffish oceanic repo man, stars in Urbina’s heist story. Offshore abortionist Rebecca Gomperts helps women in an outlaw feminist fable. Captains Adam Meyerson and Wyanda Lublink are the book’s environmentalist Ahabs, chasing down not a fearsome whale but a Japanese ship that slaughters whales in exceptionally brutal fashion. And men like Lang Long, a Cambodian who was trafficked and sold into the Thai fishing industry, are modern-day Billy Budds in a system that lacks even the rough justice of a drumhead court-martial.

That Urbina has been able to pluck these people out of the vast blue expanse that surrounds them and locate them, both on the map and in our minds, at least for a moment, is an impressive feat of reporting. (It’s also to his credit that Urbina knows how to serve as a gangway between his reader and his subject material without making himself the story.) While all nonfiction books presumably exist to tell readers something they didn’t already know, “The Outlaw Ocean” uses our lack of knowledge to bolster his argument: If we don’t know much about sea slavery or the battles between environmentalists and the fishing industry, it’s because it’s hard for us landlubbers to know what happens so far from shore.

This isn’t the only sense in which Urbina has constructed his book as a kind of inexorable current, circling around and around again. Though it certainly has its lighter segments, especially Urbina’s visit to the Principality of Sealand, a micronation founded in 1967 on an abandoned offshore platform, his stories keep converging on a grim point: that the vastness of the ocean has served the purposes of governments and businesses that prefer to operate in a realm without rules.

There are exceptions, like the tiny island nation of Palau, which is trying to curb illegal fishing through quirks of maritime law that give it dominion over 230,000 square miles of ocean. But apparently, there are plenty of powerful people who stand to benefit from the lawless state of the ocean — and plenty more of us who so badly want to believe that we can have cheap, ethically harvested seafood that we’re willing to let them keep it that way. That may be difficult to do after reading “The Outlaw Ocean.” Urbina’s chronicles of man’s inhumanity to man, as well as to fish — some of which leave the creature in “Jaws” looking less like a monster and more like a justified revolutionary — had me considering giving up seafood.

Urbina is so successful at communicating the scale of the ocean, and the cruelty and neglect above and below its waters, that reading his book sometimes feels like gasping for a breath of air before slipping under the waves again.

IAN URBINA is the director of the Outlaw Ocean Project and an investigative reporter who writes regularly for The New York Times, The Atlantic, National Geographic and other venues. He has won a Pulitzer Prize for Breaking News and a George Polk Award for Foreign Reporting. Several of his stories have been developed into major feature films and one was nominated for an Emmy Award. He has degrees in history and cultural anthropology from Georgetown University and the University of Chicago. Before being on staff at the Times for nearly two decades, he wrote about the Middle East and Africa for various outlets, including the Los Angeles Times, Vanity Fair, and Harper's Magazine. He lives in Washington D.C., with his family.