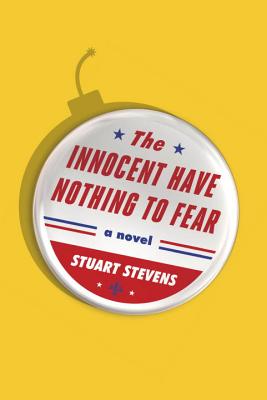 The Innocent Have Nothing to Fear

A dark comedy set at a contested Republican convention, written by a veteran political insider—the funniest and most prescient novel about politics in years.

“[Stevens] brings a full arsenal of gifts to this enterprise: humor, tactile prose and an insider’s knowledge of the hardball tactics employed on the campaign trail…. By far the most interesting parts of this novel are the behind-the-scenes accounts of the tactical and strategic maneuvering of political operatives …Stevens is a terrific raconteur — funny, observant and highly entertaining.” –Michiko Kakutani The New York Times

New Orleans in July: it's hot and sticky and squalid. J. D. Callahan is in the middle of the political race of his life and displeased to be back in his hometown. His candidate, the sitting vice president, is neck and neck with an anti-immigrant, right-wing populist as the Republicans head into their first brokered convention in decades on the heels of a staggering global economic crisis. Soon after a series of dye bombs set off a mass panic and tilt the convention toward the vice president’s law-and-order opponent, J. D.’s estranged brother shows up and asks for an inconvenient favor at a most inconvenient time, threatening to reveal a family secret that would ruin the legacy of their civil rights journalist father and destroy J. D.’s own reputation if he doesn’t follow through.

As J. D. scrambles to contain the damage on all sides, he finds himself contending with a sexy, gun-toting gossip columnist, an FBI agent convinced that J. D. is devious enough to set the bombs himself, and an old corrupt political friend of his late father with a not-so-hidden agenda. For the first time ever, J. D. is forced to reconcile the political career he’s always put first with the past he’s tried to leave behind as they careen toward each other on a disastrous collision course he may not be able to stop.

Hilarious and remarkably sharp, Stuart Stevens’s The Innocent Have Nothing to Fear is an endlessly enterTaining whodunit and a brilliant satire of our political culture.

Praise For The Innocent Have Nothing to Fear: A novel…

“[A] suspenseful satire… It’s old-school politics with a caustic jambalaya of trouble… Set in the very near future, this fun romp through high-stakes politics plays in interesting parallels to the antics of the current 2016 presidential race.”
—Booklist

“[An] inside scoop on the kooky backstory of American politics… This is, after all, a special kind of manufactured public entertainment, a world of engineered leaks and staged surprises… Stevens has assembled all the accoutrements for a crazy political novel.”
—Ron Charles, The Washington Post

“No, this book is not about the 2016 presidential campaign. But the fact that even these aspects of the novel are in sync with current events validates its author's credentials as a cagey veteran political operative…. J.D.'s rueful, acerbic commentaries… make up the best part of this fast-paced carnival of bile, guile, and blow-ups. In an era as politically mercurial as our own, even the most far-fetched events depicted here sound utterly plausible.”
—Kirkus Reviews


From the co-authors of Game Change and Double Down, praise for The Innocent Have Nothing to Fear:

“Stuart Stevens is that rare authorial animal: a political novelist who actually understands politics, who appreciates how the ambition to run the country both shapes and warps character, and who can lay it all down on the page with verve and aplomb. Gimlet-eyed, mordantly funny, and staggeringly well-timed, The Innocent Have Nothing to Fear is the perfect fictional echo of the savage surreality playing out in real time on the national stage.”
—John Heilemann

“Vivid, fresh, and funny. The characters are nuanced, the dialogue zings, and the bracing breeze of authenticity gusts from every page. Stuart Stevens knows a heck of a lot about a lot of things—politics, the press, T.V., D.C., New Orleans, love, lust, ambition, family ties, and the pressures and promises of the world’s most powerful job. It all comes together in this terrific book. Smart, crafty, spot-on timely, entirely refreshing and hugely entertaining, The Innocent Have Nothing to Fear is a great read and a total winner.”
—Mark Halperin

STUART STEVENS is the author of six previous books, and his work has appeared in The New York Times, The Washington Post, Esquire, and Outside, among other publications. He has written extensively for television shows, including Northern Exposure, Commander in Chief, and K Street. For twenty-five years, he was the lead strategist and media consultant for some of the nation’s toughest political campaigns. He attended Colorado College; Pembroke College, Oxford; Middlebury College; and UCLA film school. He is a former fellow of the American Film Institute. This is his second novel.