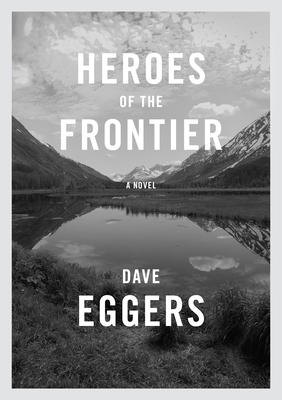 Heroes of the Frontier

Longlisted for an Andrew Carnegie Medal for Excellence in Fiction

A captivating, often hilarious novel of family and wilderness from the bestselling author of The Circle, this is a powerful examination of our contemporary life and a rousing story of adventure.

Josie and her children’s father have split up, she’s been sued by a former patient and lost her dental practice, and she’s grieving the death of a young man senselessly killed. When her ex asks to take the children to meet his new fiancée’s family, Josie makes a run for it, figuring Alaska is about as far as she can get without a passport. Josie and her kids, Paul and Ana, rent a rattling old RV named the Chateau, and at first their trip feels like a vacation: They see bears and bison, they eat hot dogs cooked on a bonfire, and they spend nights parked along icy cold rivers in dark forests. But as they drive, pushed north by the ubiquitous wildfires, Josie is chased by enemies both real and imagined, past mistakes pursuing her tiny family, even to the very edge of civilization.

A tremendous new novel from the best-selling author of The Circle, Heroes of the Frontier is the darkly comic story of a mother and her two young children on a journey through an Alaskan wilderness plagued by wildfires and a uniquely American madness.

Praise For Heroes of the Frontier…

“Among his bestselling literary fiction peers, Dave Eggers alone is engaged in a sustained effort to write about contemporary America. He’s been going at it so regularly, and so swiftly, that he’s keeping pace with the times, if not getting a half-step ahead… When Eggers draws the present into his fiction, it’s there not just as window dressing or setting; it tells us something about ourselves… Heroes gives us a woman who’s at the end of her rope, in a place of salvation without the wherewithal to seek it, as its promise goes up in flames.”
—Carolyn Kellogg, The Los Angeles Times

“This is a novel about America, about what forces people to leave ‘the lower 48’ to seek refuge in a forbidding, unpeopled landscape… Eggers renders it with such passion and good humour, and describes the ‘land of mountains and light’ in such stirring, lustrous prose… There is a feeling of utopianism about the novel, a sense that, in Alaska, some original American dream slumbers just beneath the ice… Heroes of the Frontier acts on the reader like a breath of Alaskan air, cleansing the spirit and lifting the heart.”
—Alex Preston, The Guardian (U.K)

“The phenomenally productive Eggers has talent to spare… In his books he has revealed a remarkable aptitude for inhabiting otherness and illuminating the world’s darker corners… Heroes of the Frontier again offers complex, believable characters… Entertains, often spectacularly.”
—Barbara Kingsolver, The New York Times Book Review

“Captivating…. Part adventure, part social critique, the book is occasionally harrowing and often very funny… As Eggers takes Josie through wildfires, avalanches, lightning strikes and narrow escapes from the long arm of the law, he suggests there's something a little heroic in all of us.” —Georgia Rowe, San Jose Mercury News

“Eggers, writing with exuberant imagination, incandescent precision, and breathless propulsion, casts divining light on human folly and generosity and the glories and terror of nature. This uproarious quest, this breathless journey from lost to found, this delirious American road-trip saga, is fueled by uncanny insight, revolutionary humor, and profound pleasure in the absurd and the sublime.”
—Donna Seaman, Booklist (Starred Review)

DAVE EGGERS is the author of ten books, including the national best sellers The Circle and A Hologram for the King, which was a finalist for the 2012 National Book Award. He is the founder of McSweeney's, an independent publishing company based in San Francisco. Eggers is the cofounder of 826 National, a network of eight tutoring centers around the country, and ScholarMatch, a nonprofit organization designed to connect students with resources, schools, and donors to make college possible. He lives in Northern California with his family.