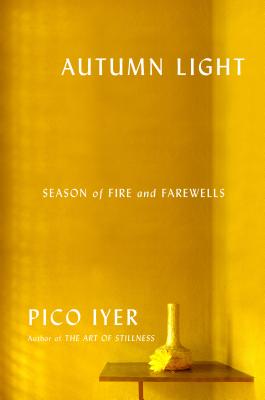 Season of Fire and Farewells

In this “exquisite personal blend of philosophy and engagement, inner quiet and worldly life" (Los Angeles Times), an acclaimed author returns to his longtime home in Japan after his father-in-law’s sudden death and picks up the steadying patterns of his everyday rites, reminding us to take nothing for granted.

In a country whose calendar is marked with occasions honoring the dead, Pico Iyer comes to reflect on changelessness in ways that anyone can relate to: parents age, children scatter, and Iyer and his wife turn to whatever can sustain them as everything falls away. As the maple leaves begin to turn and the heat begins to soften, Iyer shows us a Japan we have seldom seen before, where the transparent and the mysterious are held in a delicate balance.

Praise For Autumn Light: Season of Fire and Farewells…

“Pico Iyer [is] one of the most soulful and perceptive writers of our time . . . Between terror and transcendence, between epochs and cultures, Iyer locates the common hearth of human experience . . . Exquisite.”—Brain Pickings

“Meandering like a river, [Autumn Light] flows along with a steady pace of rumination, only to abruptly plunge off a profound waterfall . . . It is a mysteriously affecting book . . . A strange emotional fragility arises after sinking into the book, a heightened sense of awareness of what is usually neglected. As I was reading, I often found myself staring out the window in reverie; catching sight of a falling leaf would inexplicably cause me to cry . . . It’s not only a joy to read, it’s helpful . . .”—Los Angeles Review of Books

"Iyer is known primarily for his travel writing, his erudite essays on literature, and his wise, restrained accounts of his Buddhist-inflected striving for stillness and contentment. But memoir is an equally exquisite aspect of his œuvre . . . Even in his daily life, playing Ping-Pong with neighbors, he is a consummate tour guide, knowledgeable of his surroundings yet alert to all that might strike foreign eyes as unexpected or inexplicable.”—The New Yorker

“[An] exquisite personal blend of philosophy and engagement, inner quiet and worldly life . . . a vivid meditation . . . It’s Iyer’s keen ear for detail and human nature that helps him populate his trademark cantabile prose . . . [a] genuine and loving tale.”—Los Angeles Times

“What holds everything together, besides Iyer’s elegantly smooth prose style and gift for detailed observation, is a circling around the theme of autumn in Japan and this autumnal period in his life . . . This season teaches him the lesson of impermanence, the inevitability of decay and ‘how to hold on to the things we love even though we know that we and they are dying’ . . . There’s much wisdom in what he says”—The New York Times Book Review

“Iyer is a sharp-eyed observer of cultural collisions and cross-pollinations, a modern-day Mark Twain capable of leaping across borders by highlighting a single conundrum, irony or ambiguity. In Autumn Light, he presents to the outside world with simplicity, grandeur and sensitivity . . . Although ostensibly about mortality and grief, at its core Autumn Light is a celebration of enigmas.”—LIFE Magazine

“Profound . . . Iyer’s writing is both simple and lyrical . . . The memoir succeeds, with its deceptively quiet descriptions of autumn both in the natural world, and in the season of his and Hiroko’s own lives, in echoing a uniquely Japanese appreciation of the fleeting nature of time, as well as the humbling acceptance that nothing lasts.”—New York Journal of Books

“The beauty of its prose and the quality of its insight, this gentle, reflective reminiscence reveals again Iyer's literary virtuosity . . . Much of what makes Autumn Light so enchanting is the effortless way Iyer extracts meaning from life's quotidian details . . . Arresting . . . he reveals fundamental truths in an unobtrusively aphoristic style . . . An ideal volume to read and read again for both pleasure and wisdom.”—Shelf Awareness

“The beloved travel writer and journalist’s wistful and conscious memoir filled with musings about home, culture, family, and death . . . With his trademark blend of amiability, lighthearted humor, and profound observations, Iyer celebrates emotional connection and personal expression, and he upholds death as an affirmation of life and all its seasons.”—Booklist [starred]

“Luminous. . . The book is party a love letter to [his] vibrant [wife] Hiroko, whose clipped English unfolds like haiku, and it’s party and homage to the Japanese culture of delicate manners, self-restraint, and acceptance that ‘sadness lasts longer than mere pleasure.’ The result is an engrossing narrative, a moving meditation on loss, and an evocative, lyrical portrait of Japanese society.”—Publisher’s Weekly

"A lucid writer with endless curiosity, and a secularist with a searcher’s heart. . . Has any travel writer ever written this book? In choosing to exchange life as a perpetual visitor for that of a resident in Japan, Iyer finds a hopeful-making amount of freedom in living in – not just borrowing – daily rituals. . . [Autumn Light] is also a tremendously wise book on the late fires of marriage, how moving toward old age, if you’re lucky, as he is, a burst of warmth emerges to push you forward into the final step, the journey no one’s been able to write about.—Literary Hub

"The acclaimed travel writer and journalist meditates on the impermanence of life. Like many others, Iyer reveres the beauty and portent of autumn. . . Throughout the narrative, the author mixes musings on the ephemerality of existence with scenes of quotidian life. . . a thoughtful work with many poignant moments. . ."—Kirkus Reviews

“[Iyer's] signature is everywhere — in his clarity of insight, leavened with greater wisdom, his humour, turning self-deprecatory, his sense of irony . . . Iyer seems to have found what most don’t in a lifetime — light within the truth.”—The Hindu Business Line

PICO IYER is the author of more than a dozen books, translated into twenty-three languages. In recent years, he has given four talks for TED, and they have received more than nine million views so far.
Loading...
or
Not Currently Available for Direct Purchase