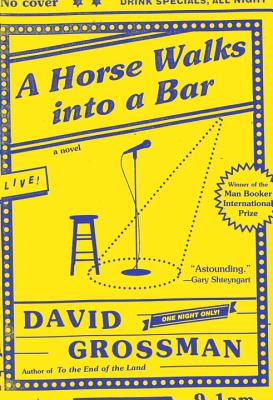 A Horse Walks into a Bar

The award-winning and internationally acclaimed author of the To the End of the Land now gives us a searing short novel about the life of a stand-up comic, as revealed in the course of one evening’s performance. In the dance between comic and audience, with barbs flying back and forth, a deeper story begins to take shape—one that will alter the lives of many of those in attendance.

In a little dive in a small Israeli city, Dov Greenstein, a comedian a bit past his prime, is doing a night of stand-up. In the audience is a district court justice, Avishai Lazar, whom Dov knew as a boy, along with a few others who remember Dov as an awkward, scrawny kid who walked on his hands to confound the neighborhood bullies. Gradually, as it teeters between hilarity and hysteria, Dov’s patter becomes a kind of memoir, taking us back into the terrors of his childhood: we meet his beautiful flower of a mother, a Holocaust survivor in need of constant monitoring, and his punishing father, a striver who had little understanding of his creative son. Finally, recalling his week at a military camp for youth—where Lazar witnessed what would become the central event of Dov’s childhood—Dov describes the indescribable while Lazar wrestles with his own part in the comedian’s story of loss and survival. Continuing his investigations into how people confront life’s capricious battering, and how art may blossom from it, Grossman delivers a stunning performance in this memorable one-night engagement (jokes in questionable taste included).

Praise For A Horse Walks into a Bar: A novel…

“David Grossman has attempted an ambitious high-wire act of a novel, and he’s pulled it off spectacularly. A Horse Walks into a Bar shines a spotlight on the effects of grief, without any hint of sentimentality. The central character is challenging and flawed, but completely compelling. We were bowled over by Grossman’s willingness to take emotional as well as stylistic risks: every sentence counts, every word matters in this supreme example of the writer’s craft.” —Judges’ Citation, Man Booker International Prize, 2017

“Astounding . . . [A] magnificently comic and sucker-punch-tragic excursion into brilliance . . . He has left a trail of blood and sweat on the page that only a true master—a Lenny Bruce, a Franz Kafka—could dream of replicating.” —Gary Shteyngart, The New York Times Book Review (front cover)

“Urgent . . . Mesmerizing . . . A novel as beautiful as it is unusual . . . Grossman takes a lot of risks in A Horse Walks into a Bar, and every one of them pays off spectacularly well . . . It’s nearly impossible to put down.” —Michael Schaub, NPR

“Accomplished and audacious . . . An Israeli offspring of Philip Roth’s Portnoy’s Complaint and Dostoyevsky’s Notes from the Underground [that is] laced with loss and leave-taking . . . Grossman has once more proved himself as one of Israel’s finest literary alchemists.” —Benjamin Balint, Haaretz

“I have never read a book like this, or even thought that one could exist . . . A hard, fast, and bumpy ride through the deserts of Israel and the soul.” —Rafael Alvarez, Washington Independent Review of Books

“Grossman brings real humanity to this heart-wrenching and well-written novel, offering insight into one man’s psychological makeup and how society has damaged him. An excellent translation; highly recommended.” —Lisa Rohrbaugh, Library Journal


Praise from the UK

“Grossman has transcended genre, or rather, he has descended deep into the vaults beneath . . . This isn’t just a book about Israel: it’s about people and societies horribly malfunctioning. Sometimes we can only apprehend these truths through story—and Grossman has become a master of the truth-telling tale . . . These are important questions at this moment in history, a time of trickery and lies. This is a novel for our new Age of Offence—offence easily taken and endlessly performed.” —Ian Sansom, The Guardian

“A polemic of unusual power . . . Shocking, raw, and eloquent. . . Grossman has pushed down deep into the wounded heart of a despairing man . . . A Horse Walks into a Bar is unlike anything Grossman has yet done. —Eileen Battersby, The Irish Times

“Grossman’s latest offering is a short, shocking masterpiece . . . in which absurdity and humour are used to probe the darkest corners of the human condition . . . It is a tale of nerve-shredding psychological and spiritual torture, the kind of story that is so dark that the only defence against it is darker laughter.” —Adam Lively, The Sunday Times (London)

“It takes an author of Mr. Grossman’s stature to channel not a failed stand-up but a shockingly effective one . . . This book feels far removed from Falling out of Time . . . Both books, however, circle around dramatic acts of mourning: the first as lyric tragedy, the second as pitch-black comedy.” —Jonathan Cape, The Economist

"Literature at its highest, and most enchanting." —Il Mattino (Italy)

"Grossman has written a beautiful and hypnotizing book, on the friction between tragedy—both personal and collective—and life, which must go on." —Il Messaggero (Italy)

"A psychological, intimate chamber drama whose choreography and eloquence captivate and pain the reader in equal measure . . . By the end, the book not only radiates humanity but demands it as well." —Leipziger Volkszeitung (Germany)

"A magnificent book about the different levels of being that we carry within ourselves." —Le Monde (France)

"Resonant of Dostoyevsky and Kafka . . . The novel is not about one man alone; its significance lies in the exposure of the failings of humanity. We knew that stand-up comedy is inflammatory, but we didn't know that it can reveal the flames of hell." —Transfuge (France)

DAVID GROSSMAN was born in Jerusalem. He is the author of numerous works of fiction, nonfiction, and children's literature. His work has appeared in The New Yorker and has been translated into more than forty languages. He is the recipient of many prizes, including the French Chevalier de l'Ordre des Arts et des Lettres, the Buxtehuder Bulle in Germany, Rome's Premio per la Pace e l'Azione Umanitaria, the Premio Ischia--international award for journalism, Israel's Emet Prize, and the Albatross Prize given by the Günter Grass Foundation.

JESSICA COHEN was born in England, raised in Israel, and now lives in the United States. She has translated contemporary Israeli fiction, nonfiction and other creative works, including David Grossman's To the End of the Land.
Loading...
or
Not Currently Available for Direct Purchase