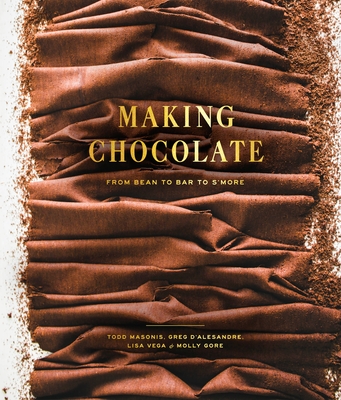 From Bean to Bar to S'more: A Cookbook

From nationally-lauded San Francisco chocolate maker, Dandelion Chocolate, comes the first ever complete guide to making chocolate from scratch. From the simplest techniques and technology—like hair dryers to rolling pins—to the science and mechanics of making chocolate from bean to bar, Making Chocolate holds everything the founders and makers behind San Francisco’s beloved chocolate factory have learned since the day they first cracked open a cocoa bean.

Best known for their single origin chocolate made with only two ingredients—cocoa beans and cane sugar—Dandelion Chocolate shares all their tips and tricks to working with cocoa beans from different regions around the world. There are kitchen hacks for making chocolate at home, a deep look into the nuts, bolts, and ethics of sourcing beans and building relationships with producers along the supply chain, and for ambitious makers, tips for scaling up. Complete with 30 recipes from the chocolate factory's much-loved pastry kitchen, Making Chocolate is a resource for hobbyists and more ambitious makers alike, as well as anyone looking for maybe the very best chocolate chip cookie recipe in the world.

Praise For Making Chocolate: From Bean to Bar to S'more: A Cookbook…

"As a longtime evangelist for the maker community, Dandelion's love of the process (so deceptively simple!) exemplifies the maker culture that I so dearly love. "--Adam Savage, Former co-host of Mythbusters and editor-in-chief of Tested.com

“Dandelion chocolate has stood out in the new crop of bean-to-bar chocolate makers in America. And while the chocolate bars are exceptional, equally exciting is the way chocolate is used in their café, deliciously crafted into cakes, brownies, and cookies, as well as blended into one of the best cups of hot chocolate I’ve ever had.”--David Lebovitz, Author, My Paris Kitchen and The Great Book of Chocolate

“Dandelion Chocolate is one of the few bean to bar producers I know with the curiosity, intelligence, seriousness, and frankly, passionate geekery needed to make extraordinary chocolate.”--Francisco Migoya, Head Chef, Modernist Cuisine

“Dandelion is shaping the world of craft chocolate.”--Chloe Doutre-Roussel. Author, The Chocolate Connoisseur: For Everyone with a Passion for Chocolate

“If I were to begin my career over again, I would be a chocolate maker at Dandelion. Their chocolate is a testament to their creative and technological abilities as well as a deep understanding of Mother Nature. Add the talents of pastry chef Lisa Vega to this mix and you have chocolate desserts that surpass any you have tasted. Making Chocolate will inspire a whole new army of chocolate geeks- of the making, eating and baking varieties."--Emily Luchetti, Dean, International Culinary Center and James Beard Foundation Award-winning pastry chef

"Making Chocolate thoroughly investigates some of the history, the manufacturing, and the sourcing of cacao. It also is a beautiful story of passion, integrity and magic around one of the most prized ingredients in the world. This book will make you want to either make your own chocolate, stock up on Dandelion chocolate or make some of the divine recipes they make in the shop in San Francisco."--Elizabeth Falkner, Chef/Author/Artist

"All the chocolate lovers will fall in love with this one. It's gorgeous to look at and will motivate you to get more adventurous for your next chocolate fix."--Buzzfeed

"Bean-to-bar is the new farm-to-table, and no one does it better than the team behind San Francisco-based Dandelion Chocolate."--Tasting Table

"If you’ve always dreamed of making your own chocolate at home, Making Chocolate is here to make your dreams come true. This is the step-by-step guide you’ve been looking for to go from bean to bar."--Huffington Post

TODD MASONIS is the co-founder and CEO of Dandelion Chocolate. After leaving a career in Silicon Valley in 2009, when he and his friend Cameron Ring sold their start-up, Plaxo, he took a traveling sabbatical to study everything from the old chocolate making traditions in France to the best way to smash cocoa beans in his kitchen. In 2010, he and Cameron founded Dandelion Chocolate, a small batch, bean-to-bar chocolate factory in San Francisco's Mission District. In 2017, the company had grown into two factories in San Francisco, and one in Tokyo.

GREG D'ALESANDRE is Dandelion Chocolate's vice president of research and development and chocolate sourcerer. He travels year round to build strong, trusting relationships with the cacao producers who partner with Dandelion Chocolate. He's been a product manager for Google, and designed laser tracking and torpedo guidance systems, but he knew he'd end up in chocolate since the day he "borrowed" liquid nitrogen from the physics lab in college to make frozen truffles. He feels strongly about direct sourcing cacao and building strong relationships with the network of cacao producers and chocolate makers around the world.

LISA VEGA is the executive pastry chef of Dandelion Chocolate. After years in Michelin starred kitchens that incl​ude Gary Danko and Providence she now spends her time improvising unique strategies for working with single origin, two-ingredient chocolate. She was named a StarChefs Rising Star for San Francisco in 2016.

MOLLY GORE is a food writer, former restaurant critic, and the Dandelion Chocolate communications manager. Her writing has appeared in Edible San Francisco, Texas Monthly, The East Bay Express, and other local outlets. Most recently, she co-authored a book about Western-style Japanese knives called Sharp (Chronicle Books 2018).
Loading...
or support indie stores by buying on