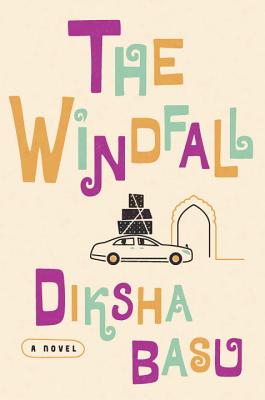 The Jhas are moving up. For the past thirty years, their lives have been defined by cramped spaces and gossipy neighbors. But when Mr. Jha comes into an enormous sum of money—the result of an unexpectedly successful internet venture—he moves his reluctant wife from their housing complex in East Delhi to the super-rich side of town, ultimately forcing them, and their son, to reckon with who they are and what really matters to them.  Hilarious and wise, The Windfall illuminates with warmth and heart the precariousness of social status, the fragility of pride, and, above all, the human drive to build and share a home. Even the rich, it turns out, need to belong somewhere.

Praise for The Windfall

“I almost fell out of bed laughing.”—Kevin Kwan, author of Crazy Rich Asians

“A fun and heartfelt comedy of manners.”—Rolling Stone

“Though money doesn’t necessarily buy the Jhas happiness, it delivers readers plenty of laughs and more.”—Esquire

Praise For The Windfall: A Novel…

Praise for The Windfall:

“It’s haves and have-mores in this hilarious yet heartfelt novel about an Indian family struggling to acclimate to their newfound wealth, while also competing with their wealthier neighbors.”
--Entertainment Weekly

“[A] fun and heartfelt comedy of manners, which looks at the ups and downs of upward mobility, the things you gain and what you leave behind.”
--Rolling Stone (Culture Index Pick)

"A comedy of manners for the globalized 21st century, The Windfall is equal parts heart and humor by a writer who is a new star."
--David Ebershoff, author of The Danish Girl and The 19th Wife

"The funniest novel to come out of India in years. Diksha Basu's The Windfall is a timely snapshot of Delhi families on their way up, down, and sideways."
--Gary Shteyngart, author of Super Sad True Love Story

"I so loved this novel - laugh-out-loud funny and yet deeply touching."
--Deborah Moggach, bestselling author of The Best Exotic Marigold Hotel

"Diksha Basu's The Windfall impressively evokes the world of a middle-class housing complex in Delhi. A master of the intimate detail, Basu can apparently enter any perspective at will. The novel has a gentleness that belies its furious subject: money."
--Karan Mahajan, author of the National Book Award finalist The Association of Small Bombs

"With a knowing wink Diksha Basu updates the comedy of manners, giving us a Delhi backdrop and plenty of second acts in 21st century lives—a thoroughly enjoyable read!"
--Jade Chang, author of The Wangs vs. the World

"I almost fell out of bed laughing as I read Diksha Basu's sharply observed satire. The Windfall is such a delicious, addictive treat, as I flipped to the last page I found myself already wanting much, much MORE."
-–Kevin Kwan, author of Crazy Rich Asians and China Rich Girlfriend

"In her debut novel, Basu sprinkles her send-up of social mobility in modern India with gentle indulgence for her characters, presenting the foibles of the Jhas with humanity and humor."
--Booklist

"Each family member embarks on a funny, poignant journey to fit in -- and find out who he or she really is."
--Good Housekeeping

“This is a delightful comedy of manners with a lot of heart... the novel's universal theme and very entertaining story should appeal to a wide variety of readers.”
--Library Journal

“Culture and capital clash in Basu's charming, funny debut...a modern and heartfelt comedy of haves and have-nots...The novel addresses a rapidly changing India from a plethora of perspectives, and the result leaves readers laughing and engrossed.”
--Publishers Weekly (starred)

"Money - who has it, how it's spent, what it buys, what it can't, what true value is, all of that - drives Diksha Basu's endearing, astute debut novel, The Windfall....Breezily entertaining enough to enthrall droves of this summer's beach and poolside readers, The Windfall also manages to seamlessly insert urgent, relevant themes of gender inequity, socioeconomic prejudice and aggression, familial expectations and constrictions, isolation, entitlement, and more."
--Christian Science Monitor

Diksha Basu is a writer and occasional actor. Originally from New Delhi, India, she holds a BA in Economics from Cornell University and an MFA in Creative Writing from Columbia University and now divides her time between New York City and Mumbai.