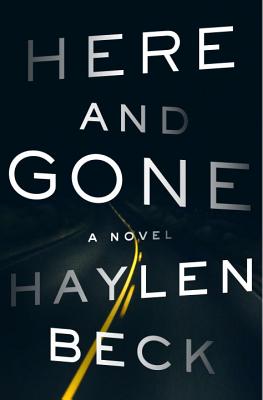 Here and Gone is a gripping, wonderfully tense suspense thriller about a mother's desperate fight to recover her stolen children from corrupt authorities.

It begins with a woman fleeing through Arizona with her kids in tow, trying to escape an abusive marriage. When she's pulled over by an unsettling local sheriff, things soon go awry and she is taken into custody. Only when she gets to the station, her kids are gone. And then the cops start saying they never saw any kids with her, that if they're gone than she must have done something with them...

Meanwhile, halfway across the country a man hears the frenzied news reports about the missing kids, which are eerily similar to events in his own past. As the clock ticks down on the search for the lost children, he too is drawn into the desperate fight for their return.

Praise For Here and Gone: A Novel…

"A tension-laden, sometimes disturbing story with a viselike grip that won’t let go…Here and Gone is terrifyingly realistic from the start to its finale.”  - Associated Press

“A fantastic thriller - a lone woman, a nightmare scenario, high stakes, breathless suspense, and a satisfying conclusion.  It doesn’t get better than this.” – Lee Child, #1 New York Times Bestselling author of The Jack Reacher Thrillers

"An almost unbearably tense nail-biter of a novel. Cancel all your plans and settle in for the ride." – Ruth Ware, New York Times Bestselling author of The Woman in Cabin 10 and In a Dark, Dark Wood

“Packed with smart twists and unforgettable characters,  Here and Gone is one of the best debuts of the year.  Highly recommended.” – Harlan Coben, #1 New York Times Bestselling author of Fool Me Once and Home

"Remarkable…the perfect handoff for fans desperate for “something like” Lee Child, Harlan Coben, and Lisa Gardner…Don’t be surprised if this one becomes the thriller everybody is reading this summer.” - Booklist (Starred Review)


“Here and Gone is a gut-grabbing, adrenaline-pumping thriller, full of intrigue, action, and characters to cheer for.  This is a book that lives up to the buzz.” – Alafair Burke, New York Times bestselling author of The Ex

"A fast-paced, engrossing thriller energized from the first few words, a book that probes the internal resources ordinary people can summon in extraordinary circumstances while never straying from a racehorse of a story set against a relentless clock. Filled with memorable characters, Here and Gone is the type of thriller that stays with a reader long after the explosive final pages are completed." – John Katzenbach, New York Times Bestselling author of The Dead Student

"Holy hell. Talk about a rip-roaring page turner. Readers, I dare you to try’n put this book down once you hit that twist at the end of chapter 5. Once I reached that epinephrine shot, the rest of my night was Here and Gone." - Gregg Hurwitz, bestselling author of ORPHAN X

Haylen Beck is the pseudonym of an acclaimed, Edgar-nominated author whose crime fiction has won the Los Angeles Times Book Prize, and made best-of-year lists with numerous publications including The New York Times, The Los Angeles Times, and The Boston Globe.
Loading...
or
Not Currently Available for Direct Purchase