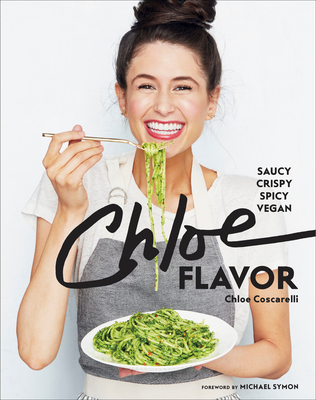 Chef Chloe Coscarelli has revolutionized how vegans cook and eat with exciting, plant-based recipes that are fun, full of flavor, and make you feel healthier. When she decided to become a vegan chef, she dreamed of changing the way the world ate. This was in the “pre-kale” days, when veggie burgers were frozen, tasteless patties loathed by the general public and if a vegan wanted to eat, well, then she had to cook! Today, corner stores stock their shelves with almond milk and mainstream restaurants pepper their menus with quinoa, tempeh, chia seeds, faro, ramps, and so many variations of avocado toast. There is truly no better time to love to eat than now—and no easier time to be a vegan.

Chloe believes the most delicious dishes come from plant-based ingredients, and has debunked the myth that vegan cooking is bland and visually unenticing. Enter: CHLOE FLAVOR. Every recipe here is bold in taste, loud in color, unabashedly unique, and, above all, easy to make. With dishes like Smoky Grits & Greens, Mango-Guacamole Crunch Burgers, and Sea Salted Chocolate Chunk Cookies, this food is for fun, friends, and family—and it’s all about the flavor. Vegans will delight in Chloe’s creations and carnivores won’t miss the meat one bit.
First breaking onto the culinary scene as the only vegan chef to capture the top prize on Food Network’s Cupcake Wars, Chef Chloe Coscarelli has since been recognized for bringing vegan cuisine to the mainstream as an award-winning chef, successful entrepreneur, and bestselling cookbook author. She has published three bestselling cookbooks, and in 2015 she opened her first restaurant, by CHLOE., bringing healthy and satisfying vegan and plant-based dishes to the masses. She lives in New York City.

"With Chloe Flavor, [Coscarelli] is pushing beyond her comfort zone with culinary recipes that show vegan food as a genuine flavor-packed cuisine rather than a dietary restriction." —Nylon

“The California native also just came out with a new cookbook, Chloe Flavor, which she wrote to make her trademark fun, modern take on vegan cuisine more accessible to the home cook next door.” —Well + Good

“This kick-ass vegan recipe book is anything but limiting. Filled with all things saucy, spicy, and crispy, Coscarelli's inspired dishes are inventive and crave-worthy.“ —Refinery29


"If you're trying to follow a healthy diet but keep craving comfort foods, do yourself a favor and pick up Chloe Flavor." —Health


"These [recipes] are true game-changers." —Shape

“Consider this book the gateway to a world of craveable, plant-based comfort food… that provides just the right amount of hand-holding.” —Healthyish

"Filled with some of the most craveable vegan food on the planet, it truly lives up to its name, with food that tantalizes all of the senses." —MindBodyGreen


“Coscarelli has shown time and again that vegan food can be delicious, flavorful and can appeal to a wide-range of people.” -The Daily Beast


"This book is packed with the kind of genuinely exciting vegan recipes that the plant-based chef is famous for." —Brit + Co


“An essential book for those who want to discover Catalan culture and tradition through their tastebuds.” —Pau Gasol, NBA player

“This book will help you discover one of the world’s most ancient cuisines. Guided by the magnificent chef Daniel Olivella, you will travel throughout Catalonia, a culinary crossroads influenced by everyone from the Greeks and Romans to the Arabs and Jews and even the cultures of the Americas. Catalan chefs incorporated all of these influences and developed a unique cuisine with a distinctive personality. Read this book and cook the recipes. Nothing will taste too exotic because Catalan cuisine has been woven into the history of American cuisine itself—thanks, in part, to culinary ambassadors like Daniel Olivella.” —Fermí Puig, restaurateur


“I fell in love with Chloe after watching her make history as the first vegan to win Food Network’s Cupcake Wars, and now, years later, she continues to dazzle the world with her delicious vegan creations. And I’m so happy she does! From California Nachos to Avocado Pesto Toast, every single recipe in Chloe Flavor has been infused with Chloe’s passion for creating fun, flavorful, and fuss-free dishes that demonstrate just how versatile and exciting plant-based eating can be.” —Angela Liddon

“As a Southern cook, the biggest challenge in making vegan dishes is trying to figure out how to leave out meat and dairy without sacrificing flavor and texture. Chloe is one of my favorite vegan chefs because she really understands that you have to maintain not only the great flavors of traditional dishes, but also preserve those great textures. Whether you are 100% vegan or just want to incorporate more whole food, plant-based dishes into your life, Chloe’s got the answers.” —Trisha Yearwood

“Chloe is such a kind, generous soul—and her spirit shines through in these recipes. Everything is easy-to-follow, crave-worthy, and completely nourishing. Chloe Flavor is a must-have, whether you’re a longtime vegan or just looking to incorporate more contemporary elements into your kitchen repertoire.” —Kerry Diamond

“Chloe has changed the way vegans are seen, she has transformed the vegan landscape, and she has stolen this vegan’s heart. Chloe Flavor is a must-have for anyone looking to expand their diet, their mind, and their palate as part of Chloe’s plant-based revolution.” —Mayim Bialik

Since breaking into the culinary scene as the only vegan chef to capture the top prize on Food Network's Cupcake Wars, Chef Chloe Coscarelli has been recognized for bringing vegan cuisine to the mainstream as an award-winning chef, successful entrepreneur, and bestselling cookbook author. Debunking the myth that vegan cooking is bland and visually unenticing, Chloe shares her bright, colorful, and tasteful recipes using fresh, healthy ingredients. She has published three bestselling cookbooks, bringing healthy and satisfying vegan and plant-based dishes to the masses.
Loading...
or support indie stores by buying on