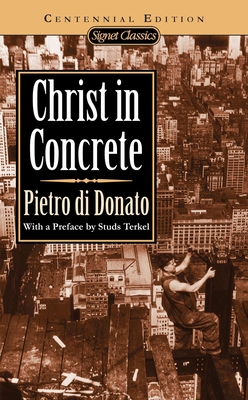 An uncompromising yet beautiful portrait of the life of Italian immigrants on the Lower East Side of Manhattan in the 1920s, Christ in Concrete is the story of a twelve-year-old boy who must support his family after his father's untimely death.

Pietro di Donato was born on April 3, 1911, in West Hoboken, New Jersey. When his bricklayer father, Geremio, died in a building collapse in 1923, Pietro left school to support his family as a construction worker. Though he had little formal education, Donato loved French and Russian novels, and took night classes at the city college in construction and engineering. Inspired by the works of Émile Zola, he decided to begin writing about his experiences in the Italian American community. In 1937 the first version of Christ in Concrete—a chronicle of his father's life—was published in Esquire. It was then expanded into a novel and became a bestseller. Donato wrote five more books in his lifetime. He died in 1992.

Studs Terkel (1912–2008) grew up in Chicago. He graduated from the University of Chicago in 1932 and from the University of Chicago Law School in 1934. He acted in radio soap operas, worked as a disk jockey, a radio commentator, and a TV emcee, and traveled all over the world doing on-the-spot interviews. He also had a daily radio program on WFMT in Chicago that was syndicated throughout the country. He was the author of American Dreams: Lost and Found; Working; Hard Times: An Oral History of the Great Depression; Division Street: America Giants of Jazz; and Talking to Myself.