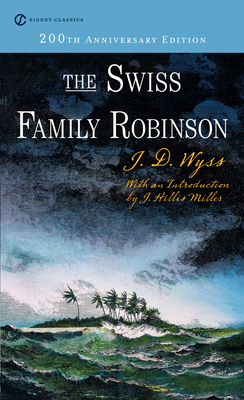 The classic adventure tale of a brave family who must come together to survive in their new deserted island home.

Swept off course by a raging storm, a Swiss pastor, his wife, and their four young sons are shipwrecked on an uncharted tropical island. Thus begins the classic story of survival and adventure that has fired the imaginations of readers since it first appeared in 1812. With optimism and boundless enthusiasm, the Robinson family undertakes the extraordinary task of constructing a home for themselves and exploring the primitive island filled with strange and beautiful creatures and exotic fruits and plants. Rich in action and suspense, The Swiss Family Robinson is an exhilarating novel takes us to a faraway place of danger and beauty, where the courageous Robinson family embarks on a thrilling new life of adventure and discovery.

With an Introduction by J. Hillis miller
and an Afterword by Elizabeth Janeway

Johann David Wyss (1743–1818) was an army chaplain with four sons; it was to entertain them that he wrote The Swiss Family Robinson. His son Johan Rudolf prepared the manuscript for publication in Zurich in 1812–13. The first English edition was translated by William Godwin in 1814.

J. Hillis Miller taught for many years at Johns Hopkins University and then at Yale University, before going to the University of California at Irvine in 1986, where he is now a UCI Distinguished Research Professor. He is the author of many books and essays on nineteenth- and twentieth-century English, European, and American literature and on literary theory. His books include Others, Speech Acts in Literature, and On Literature, the last of which includes a section on The Swiss Family Robinson.

Literary critic and feminist thinker Elizabeth Janeway is the author of six novels and many works of nonfiction, including Improper Behavior, Powers of the Weak, and Between Myth and Morning.
Loading...
or support indie stores by buying on