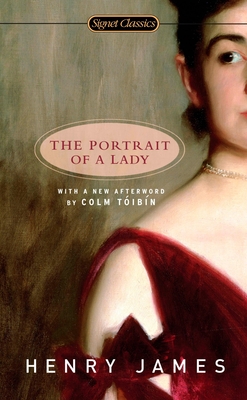 The Portrait of a Lady

The Portrait of a Lady is Henry James’s classic novel featuring the strong and spirited Isabel Archer, the embodiment of women’s independence and strength.

The heroine of this powerful novel, often considered James’s greatest work, is the vivacious young American Isabel Archer. Blessed by nature and fortune, she journeys to Europe to seek the full realization of her potential—or in modern terms, “to find herself”—but what awaits her there may prove to be her undoing.

During her journey, wooers vie for her attentions, including an English aristocrat, a perfect American gentleman, and a sensitive expatriate. But it is only after the ingenue falls prey to the schemes of an infinitely sophisticated older woman that her life takes on its true form. With its brilliant interplay of tensions and characters, The Portrait of a Lady is a timeless and essential American novel.

Praise For The Portrait of a Lady…

“The Portrait of a Lady is entirely successful in giving one the sense of having met somebody far too radiantly good for this world.”—Rebecca West

Henry James (1843–1916) spent his early life in America but often traveled with his celebrated family to Europe. After briefly attending Harvard, he began to contribute both criticism and tales to magazines. Later, he visited Europe and began Roderick Hudson. Late in 1875, he settled in Paris, where he met Turgenev, Flaubert, and Zola and wrote The American. In 1876, he moved to London, where two years later he achieved international fame with Daisy Miller. His other famous works include The Portrait of a Lady (1881), The Princess Casamassma (1886), The Wings of the Dove (1902), and The Golden Bowl (1904). In 1915, a few months before his death, he became a British subject.

Regina Barreca, professor of English literature and feminist theory at the University of Connecticut, has edited numerous books, including Make Mine a Double, The Signet Book of American Humor, and Don’t Tell Mama: The Penguin Book of Italian American Writing. She has written nine books, including Babes in Boyland, It's Not That I’m Bitter, or How I Learned to Stop Worrying About Visible Panty Lines and Conquered the World and They Used to Call Me Snow White. . . But I Drifted. She writes a weekly column for the Hartford Courant which is distributed nationally, and also writes regularly for such publications as the New York Times, Cosmopolitan, Psychology Today, the Chronicle of Higher Education, and the Huffington Post and has appeared, often as a repeat guest, on 20/20, 48 Hours, and Today.

Colm Tóibín’s acclaimed novels include The South (shortlisted for the Whitbread First Novel Award and winner of the Irish Times/Aer Lingus First Fiction Award), The Blackwater Lightship (shortlisted for the IMPAC Dublin Prize and the Man Booker Prize), The Master (Dublin IMPAC Prize; the Prix du Meilleur Livre; the LA Times Novel of the Year), Brooklyn (Costa Novel of the Year), Nora Webster, and The Testament of Mary. His nonfiction works include All a Novelist Needs: Essays on Henry James, Bad Blood: A Walk Along the Irish Border, and The Sign of the Cross: Travels in Catholic Europe. Editor of The Penguin Book of Irish Fiction, he is a regular contributor to the New York Review of Books and a contributing editor at the London Review of Books.
Loading...
or support indie stores by buying on