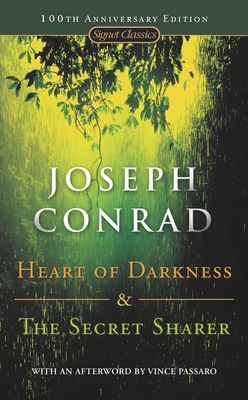 Heart of Darkness and the Secret Sharer

In this pair of literary voyages into the inner self, Joseph Conrad has written two of the most chilling, disturbing, and noteworthy pieces of fiction of the twentieth century.

Heart of Darkness is a devastating commentary on the corruptibility of humanity. Based on Conrad’s own 1890 trip up the Congo River, the story is told by Marlow, the novelist’s alter ego. It is a journey into darkness and horror—both literally, as the narrator descends into a sinister jungle landscape, and metaphorically, as he encounters the morally depraved Mr. Kurtz. The Secret Sharer is the tale of a young sea captain’s first command as he sails into the Gulf of Siam—and into an encounter with his mysterious “double,” the shadow self of the unconscious mind.

Joseph Conrad boldly experimented with the novella and novel forms, filled his writing with the exotic places he himself had traveled, and concerned himself with honor, guilt, moral alienation, and sin. Heart of Darkness and The Secret Sharer encapsulate his literary achievements—and his haunting portrayal of the dark side of man.

A native of Poland, Joseph Conrad (1857-1924) spent his youth at sea, and although relatively ignorant of the English language until the age of twenty, he ultimately became one of the greatest English novelists and stylists. At the age of thirty-two, he decided to try his hand at writing, left the sea, married, and became the father of two sons. Although his work won the admiration of critics, sales were small, and debts and poor health plagued Conrad for many years, until the success of Chance (1913) gave him financial security. Among his best-known works are Lord Jim (1900), Heart of Darkness (1902), The Secret Sharer (1907), Under Western Eyes (1911), and Victory (1915).

Joyce Carol Oates is the author of numerous novels, as well as collections of stories, poetry, and plays. The Roger S. Berlind Distinguished Professor in the Humanities at Princeton University, she is the recipient of numerous literary awards, including the National Book Award, the PEN/Bernard F. Malamud Award for the short story and the Prix Femina.

Vince Passaro is the author of Violence, Nudity, Adult Content: A Novel, as well as criticism, essays, and short fiction that have appeared in many national magazines, including Harper's Magazine, Esquire, GQ, Elle, O The Oprah Magazine, The New York Times Sunday Magazine, Story, Open City, Salon.com and others. Both his fiction and essays have been widely anthologized, and he has taught literature and creative writing at New York University and Columbia University.
Loading...
or support indie stores by buying on