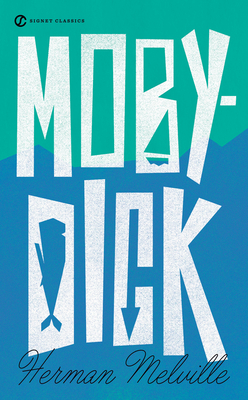 At the heart of Moby-Dick is the powerful, unknowable sea—and Captain Ahab, a brooding, one-legged fanatic who has sworn vengeance on the mammoth white whale that crippled him. Narrated by Ishmael, a wayfarer who joins the crew of Ahab’s whaling ship, this is the story of that hair-raising voyage, and of the men who embraced hardship and nameless horrors as they dared to challenge God’s most dreaded creation and death itself for a chance at immortality.

A novel that delves with astonishing vigor into the complex souls of men, Moby-Dick is an impassioned drama of the ultimate human struggle that the Atlantic Monthly called “the greatest of American novels.”

Herman Melville's (1819-91) father's bankruptcy and death in 1832 deprived him of higher-educational oppotunities and alienated him forever from a conventional view of life. He taught school, sailed to Liverpool and back, then shipped before the mast on a Pacific whaling voyage. He deserted at the Marquesas Islands, living for a month among the cannibal Typee natives. An Australian whaleship then took him to Tahiti, where he was jailed for mutiny, but he escaped and spent some months as a beachcomber. A third whaleship took him to Hawaii, where he lived for some months before sailing home with the crew of the frigate United States. From these adventures came his popular and increasingly imaginative travel romances: Typee (1846), Omoo (1847), the allegorical Mardi (1849), Redburn (1849), White-Jacket (1850), and his masterpiece, Moby-Dick (1851). Melville married in 1847. His later works of fiction were not sea romances and sold poorly. He gave up professional writing and for twenty years served as a customs inspector in New York, where he died. Billy Budd, written in his last years, was published for the first time in 1924, on the crest of a Melville revival that began about 1920 and continues to the present day—a revival that has established him among the greatest American writers.

Elizabeth Renker teaches English at Ohio State University. She is the author of Strike through the Mask: Herman Melville and the Scene of Writing.

Christopher Buckley is a widely published essayist and the author of fifteen books, including Thank Your for Smoking and Losing Mum and Pup. At eighteen, he worked his way around the world as a deckboy aboard a Norwegian merchant ship. His first book was Steaming to Bamboola: The World of a Tramp Freighter, and he has crossed the Atlantic twice aboard a sailboat and the Pacific once.
Loading...
or support indie stores by buying on