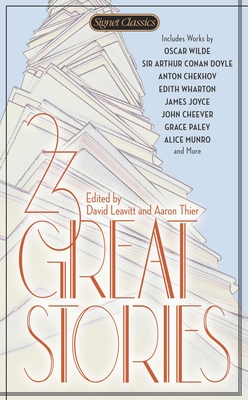 “The Fall of the House of Usher” by Edgar Allan Poe
“To Build a Fire” by Jack London
“The Necklace” by Guy de Maupassant
“The Man Who Would Be King” by Rudyard Kipling
“The Gift of the Magi” by O. Henry
“The South” by Jorge Luis Borges
“Good Country People” by Flannery O’Connor
“The Blind Dog” by R. K. Narayan
and Fifteen Other Classic Tales in One Volume

Masterpieces by some of the finest writers ever to make words come alive on paper, the stories in this volume have been selected to represent the full spectrum of the storyteller’s art. Here are works of suspense, mystery, allegory, and human drama. Given sharpened focus through insightful editorial commentary, each of these tales is distinctive in style and vision—and each is uniquely memorable.

David Leavitt’s novels and story collections include Family Dancing (finalist for the PEN/Faulkner Prize and the National Book Critics’ Circle Award), Arkansas, The Lost Language of Cranes, While England Sleeps (finalist for the Los Angeles Times Fiction Prize), and The Indian Clerk (finalist for the PEN/Faulkner Prize and shortlisted for the IMPAC/Dublin Award). His Collected Stories appeared in 2003. A new novel, The Two Hotel Francforts, is due out next year. He is codirector of MFA@FLA, the MFA Program in Creative Writing at the University of Florida, where he edits the literary journal Subtropics.

Aaron Thier received his BA from Yale and his MFA from the University of Florida. His essays and reviews appear frequently in The Nation and The New Republic, and he is a contributor to the popular narrative iPhone app called “The Silent History.”
Loading...
or support indie stores by buying on